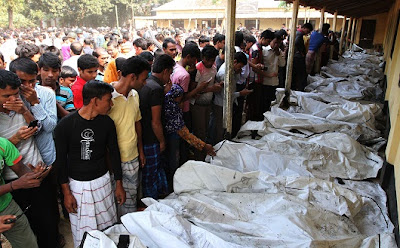 Check out TUC Owen Tudor post at Stronger Unions on the latest fire massacre at a Bangladesh textile factory.

It is estimated that 120 workers are dead, many of them young women who died behind locked fire escapes while some even jumped to their deaths to avoid being burnt alive.

Owen is completely right that the best way to protect these vulnerable and exploited workers are strong and independent trade unions.

But this does not let British, European and USA companies which invest in such factories or source cheap clothes in Bangladesh to sell in the West off the hook. Nor pension or insurance companies who make money from these companies or to be frank the consumers who buy products without knowing the conditions that the human beings who sweated to make them endure. Have we all got blood on our hands?

Tazreen Fashions who owns the factory apparently makes goods for "H&M, Walmart, Denim, Marks and Spencer, Carrefour, IKEA and others". It is alleged that it was widely known that this factory was unsafe but nothing was done.

Next week there is a meeting of the UNISON London Pension network and I will be asking members to bring up this up with their fund managers. What are they doing to make sure that the companies we invest in make sure that such things cannot happen again? This is an investment as well as an ethical issue. Not only should pension funds (and pensioners) not want to prosper from investing in companies that kills its workers but there is now overwhelming evidence that companies that act responsibly produce superior long term financial returns.

We need to make sure at a minimum that all the companies in the supply line we invest in recognise and support trade unions (Please note this also applies to all those UK organisations who disgracefully refuse to recognise and bargain with independent trade unions at home. What message are they sending?) but also that they make sure that act at all times responsibly.

On Wednesday evening at the LAPFF conference I spoke to a Governance adviser for a leading fund manager, who told me that due to rising wages in China, mass textile production is moving to cheaper zones such as Bangladesh. So the problem is likely to get even worse.

On Thursday evening at the LAPFF conference hotel there was a false fire alarm at 4am. While I am not for a moment comparing things with that at Tazeen Fashions, it did make me think at the time what I would do if I was trapped by raging fires and locked safety doors in my 3rd floor room.

Unless we all do our bit as consumers and investors to demand effective change I have no doubt that I will be reporting on something equally horrific sometime soon.
Posted by John Gray at Saturday, December 01, 2012