Equality: how radical can the next Labour Government be? 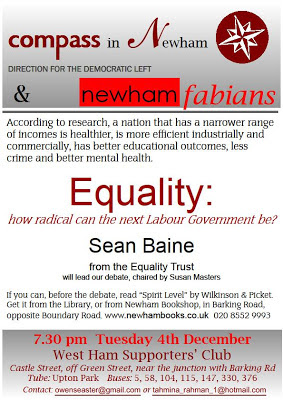 Newham Compass & Fabians are holding their next event on how radical the next Labour Government will be with regard to achieving greater income equality.

This will be held on 7.30pm Tuesday 4 December 2012 at West Ham Supporters club in Green Street.

The guest speaker will be Sean Baine from the Equality Trust. The trust is "an independent, evidence based campaign working to reduce income inequality in order to improve the quality of life in the UK". It was set up by the authors of the Report "The Spirit Level".

Sean spoke at my UNISON Housing Association branch AGM early this year on the same subject. I met him again last month at the launch of Class. He is very good speaker and it should be an interesting debate.

I have a Council meeting clash that evening so might not make it. My take on this is that is the most important political issue and is central to nearly all my beliefs. Radically reducing levels of income inequality should be a key manifesto pledge.

Yet we cannot just sit back and pontificate about this but we need to get out and convince the Great British Public that this is necessary and will benefit everyone in our society.
Posted by John Gray at Saturday, November 17, 2012