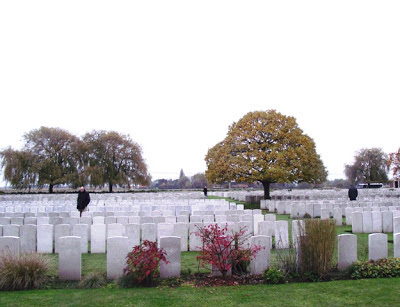 This weekend I am in Ypres, Belgian visiting some of the First World War Battle sites, museums and cemeteries.

Picture is of the war graves at Lijssenthoek Military Cemetery. It is at the site of a former hospital and with nearly 11,000 graves is the 2nd biggest British and Commonwealth cemetery in Belgian.

It is incredibly emotional and moving to walk along the rows and rows of graves.

The vast majority of the dead were so young.  Their surnames remind us of friends and work colleagues. They are from every class, every part of the UK and every part of the Commonwealth. A few have their photos from real life smiling laid alongside. Gravestones of German soliders now lay side by side their former enemies.   There are red poppy wreaths on some graves from UK primary school children who came from the same towns and villages as the fallen and came to show their respect.

In the picture to my left is Rob Frisby my brother-in-law (ex-RAF), to the right his son Matthew and in the middle, Matthew's friend from his high school days, Ashley. Tomorrow we hope to visit Battlefield sites and Menin Gate.
Posted by John Gray at Friday, November 09, 2012