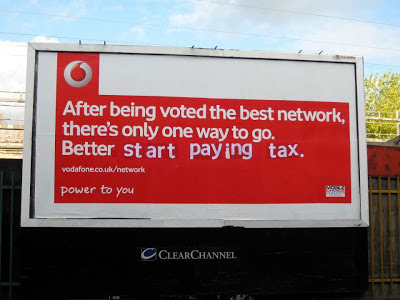 Don't worry, Labour's Sir Robin Wales is on the case with these tax dodgers.

Look how many small and have been reported to reported to the HMRC for tax evasion. All those petty small market traders.

Why should we pick on the likes of Starbucks, which are openly trading in Westfield and paying no tax? How many more of those glitzy business in Westfield don't pay tax? Did n't Stephen Timms MP re-joice when Starbucks opened in East Ham.

Tell me about all the tax dodgers who have been given tax breaks in the Royal Docks Enterprise Zone. Why is Newham airport registered off shore in a tax haven?

Down with the poor!

Why is your blog slow to load. It crashes my browser.

"Newham Council and the Metropolitan Police have joined forces to target companies that are breaking the law by not paying the National Minimum Wage".

I am angry about this. Why is Robin Wales re-allocating 20+ policers officers from vital work like catching drug dealers, muggers....


A guy was mugged on my streets. Why were these criminals never caught?


The Mayor wants to take on more challenges. It would not surprise me, RW wants such powers so he can make money off businesses. Nothing Newham ever does is benevolent.

Not really sure what you are going on about to be honest. Everyone in Newham wants a more fairer society where the rich pay their proper share.

Apologies - There is a problem with IE on this blog which I am trying to fix. I'm going to try another template. It works fine on Chrome (hardly surprising I suppose)

I would be careful about headlines. As the article points out the Council cannot currently enforce National Minimum Wage? Newham pays for Met Police officers to support its enforcement and ASB teams. These are Police who otherwise would not be in Newham.

As usual in Newham, the useless opposition is obsessed with name calling and personalities, not "politics".

Play the ball anon, not the players.