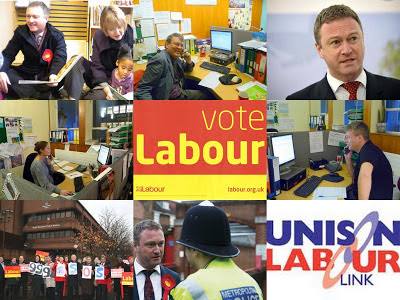 After today's TUC Pension Trustee conference I went upstairs in Congress House to the UNISON regional office for a voter ID telecanvass session.

There was only a few of us at Congress House but more at the UNISON centre in Euston Road.

We used the same very efficient and clever (but a bit buggy) software that we used in the GLA elections last year to ring the 800 UNISON members in Croydon North.

UNISON members are an interesting lot to ring up. You get a far better quantitative and qualitative response than normal Labour Party telecanvassing. Most of those we manage to speak to (the curse of the answer machine) will be more honest and open about their voting intentions. It is humbling how many will immediately volunteer their total support and that of their family for the Labour Party. While you also have frank conversations with rank and file members about their gripes and moans about the union.

I may have been just a little lucky tonight but conversations I had with members, who by and large had never spoken to a union bod outside their workplace, were positive and constructive. Labour candidate, Steve Reed, does seem quids in to be the next Croydon North MP but no one should take anything for granted.

If you can help out during the next 2 days go to :-

Times of opening:
Wednesday 28 November between 10.30am to 8pm
Polling Day Thursday 29 November between 8.30am and just before the polls close at 10pm.
We need all the phones to be constantly in use, so please don’t wait to be asked. Ring 07985 290 644"
UPDATE: Victory for Steve and Labour
Posted by John Gray at Tuesday, November 27, 2012