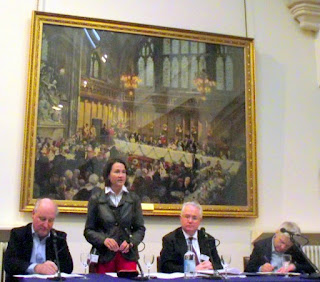 On Saturday I went to the London Councils Summit at the medieval Guildhall in the City of London. I had my ward surgery at 10am so I missed the morning session and opening keynote speech by London Mayor, Boris Johnson. I gather it was as silly and superficial as usual.

I stopped off at a lunchtime London Councils "micro-surgery" on "Social Media" and came away convinced that I should try a "Tweet up" Councillor Surgery. Tell everyone I will be available on twitter on such and such date and time for 1 hour for West Ham ward matters. Watch this space.

We all live in our own political comfort zones and bubbles. So it is rewarding to come out and meet the enemy, and find they are as convinced and comfortable with their own political prejudices as you are with yours. Catherine and Richard are chalk and cheese. Yet they were both polite and humorous in their attempts to convince us of the merits of their very different approaches to the dire and desperate financial situation we are in.

In the Q&A Richard was not impressed with my comment about the report last week by PWC that London Councils pension funds could have been £1.6 billion better off if they had merged. Nor that the outsourcing of all Barnet Council back office services will result in his pension scheme going belly up and this will completely wreak their finances.

The final session "taking the temperature - London's Political Landscape" by Robert Gordon Clark and Tony Travers was so interesting that I stopped tweeting in case I missed anything. You can check out what people did tweet about at #lcSummit.
Posted by John Gray at Sunday, November 18, 2012