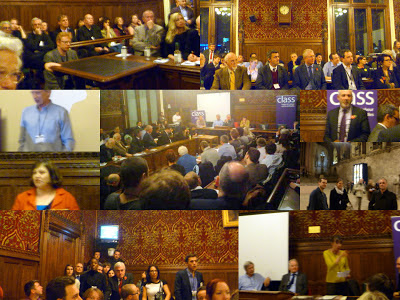 Collage is from the Parliamentary launch last Wednesday evening of "Class" The "Centre for Labour and Social Studies". A new "left" think tank.

The launch featured its latest report "Why Equality Matters". Which is a more populist and accessible version of the book "The Spirit Level - Why Equality is better for everyone".

The meeting was packed with loads of Labour MPs. Including Stephen Timms from East Ham.

I asked the question about whether we were really preaching to the converted here tonight when we should be asking what actual policies will be needed to bring about a more equal society. Should we be honest with the electorate, that everyone will have to pay more in taxes not just the super rich, to bring about a society that benefits everyone? (such as truly affordable housing and childcare)

Owen Jones responded by saying that at first we we need to start with a tax on the rich and make sure that they do not evade their taxes, then we could be more ambitious. The wealth of the Sunday Times "Rich List" has grown during this "recession" by more than the total sum of the deficit.

Frances O'Grady was fiery and passionate in her response. Growth in real wages is key in reducing inequality and recession. UK companies have reduced wages and accumulated £750 billion in reserves. No wonder we have no demand in our economy.

Afterwards I met up with my best ever blogging mate, Dave Stroppy, (nee Osler) and we went with UNISON comrades to sort the world out at the Red Lion.