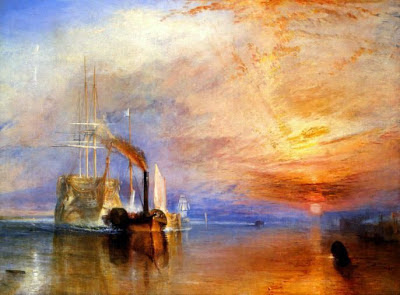 Off message: This simply gorgeous sunset by J M W Turner of the old Battleship being towed towards the breaker's yard was once voted the "Greatest Painting in any British Gallery". I agree - and a canvass print of the painting is one of my 50th birthday presents yesterday.

Last weekend I went to the Portsmouth Historic Docks and visited HMS Victory and HMS Warrior. I found that there was a 23 year old John Gray who served in HMS Victory during the Battle of Trafalgar  in 1805. I'll post pictures on Facebook of this visit, including a boat trip to look at a £400 million modern day Naval Battleship and older ones awaiting the same fate as the "Temeraire".

This weekend I am going to Ypres in Belgium with my nephew Matthew, his mate Ashley and my brother-in-law Rob. We are planning to visit the First World War Battlefield sites and museums. On this forthcoming Remembrance Sunday, we are going to show our respects to the British and Commonwealth dead at Menin Gate.

My Taid (Welsh for Grandfather) fought in the First World War in the Royal Naval Division (63rd). There was too many men volunteering for the Navy at the beginning of that war so Winston Churchill who was in charge decided to form a land fighting navy division. The RND was constantly in the thick of it in France (and Gallipoli) during the War. It lost the equivalent of four times its numerical strength in dead and wounded (stop and think about this figure) .

My Taid (who also survived Gallipoli) received this citation in 1917 "Temporary Lieutenant Frederick John Matthews RNVR for conspicuous gallantry and devotion in leading his company forward with ammunition under a heavy machine gun fire. He also attacked and captured a machine gun position, seizing the gun and taking about forty prisoners for which he was awarded the Military Cross".

My Auntie Di (daughter-in-law of Taid) wants to visit Flanders. I have promised her that this weekend will be a tester and if it all goes well then perhaps the wider Matthews Clan can organise a similar gathering next year?
Posted by John Gray at Thursday, November 08, 2012