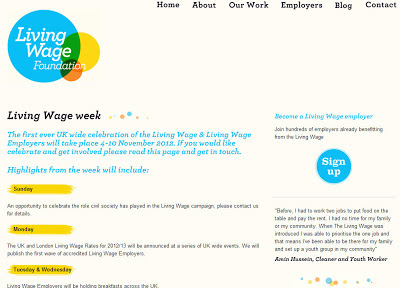 Next week is "Living Wage Week" and tonight the motion below was passed at West Ham Labour Party ward.

The Living wage campaign is a great step forward but we must not let employers "off the hook" with regard to decent holidays, sickness and pension benefits as well as trade union recognition.

"Support for a Living Wage plus for all workers in Newham

West Ham Branch:-
This motion was passed unanimously and will now go to West Ham General Committee on the 22 November. See if you can send a similar motion to your trade union or Labour Party branch?

Update: I will try and amend slightly at GC. A new point. "The UK is in terms of income one of the most unequal countries in the World. Research in the book "The Spirit Level" demonstrates the destructive and harmful impact such inequality has on our society. Raising low wages is key to reducing this inequality".  Also add "collective bargaining" to 8.
Posted by John Gray at Thursday, November 01, 2012