Octavia Hill, Housing, the Diffusion of Beauty (& other things) 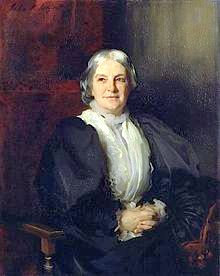 On Monday it was the 100th anniversary of the death of Octavia Hill. She was one of those remarkable, talented, passionate strong willed, Victorians whose influence is still live and kicking a 100 years on. While I don't actually agree with everything she did or believed in - if you work or have an interest in social housing you simply cannot ignore her.

She is credited with the development of social housing, the Army Cadet Corp, the National Trust, and even being "a forebear of occupational therapy". I love the fact that she was once a treasurer of the "Society for the Diffusion of Beauty".

She believed that the poor deserved decent, affordable, well managed housing. However, she did not believe either in state subsidised housing, female emancipation nor even social security. She was also a very hard taskmaster with regard to rent arrears or anti-social behaviour, which I believe would be popular on modern day housing estates but produce a field day for human rights lawyers.

Octavia also believed in the role of women in housing management. This was of course at a time when women were excluded from nearly all "professions". Women trained by her later founded the Institute of Women Managers in 1916. This much later eventually became the Chartered Institute of Housing (CIOH).

One final thought is that I remember attending a meeting of the London branch of the CIOH in middle 1990's. They had an elderly female speaker (whose name I am sorry I have long forgotten) to speak about the history of housing management. I remember her clearly talking about the significant role of women in housing management since Octavia Hill. She looked around at the (majority male) audience in the room and asked what has happened in housing management in recent years - "Where have all the women gone"?
Posted by John Gray at Wednesday, August 15, 2012

I now live in Wisbech, the birth place of Octavia Hill, and the house where she was born is a small museum and well worth a visit. There is an excellent booklet about her available from the Wisbech Museum.

Thanks for that. Next time I'm in March for work I will see if I can go and visit.