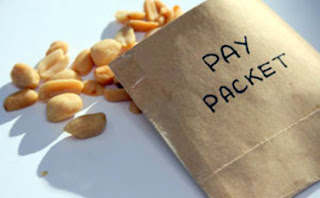 Inside Housing magazine report here on an attack by Unite on One Housing Group for planning pay cuts to its care and support workers.

The Chief Executive of One Housing Group in 2010/11 got at least £134,000 in pay (One Housing apparently refused  to disclose his bonus or how much his lease car cost).

In a response by a reporter about the prospect of industrial action I made this comment on the Inside Housing website. "I think that it is almost inevitable that there will be serious and sustained industrial action and further conflict. A small number of rogue employers are leading a race to the bottom and actively under cutting good employers. Workers in our sector are being to realise that they cannot depend on TUPE or employment law and that as a last resort they will have no alternative but to take action to defend not only their own pay and conditions but also to protect our clients and retain quality services".

WHat do you have to say about the proposals by Newham's Mayor, to only provide socail housing to people with jobs? Aside from it beign a clear attack on people who are unemployed through no fault of their own, this will disproportionately affect disabled, BME and women residents.

Will you be opposing this measure?

I am afraid you are misinformed. There is no proposal to “only” provide social housing to those with jobs.

Thankfully social housing is not and has never been restricted only for the unemployed. It is not even (currently) means tested.

For social housing to work it needs mixed and balanced communities.

One Housing Group are still trying to cut Support Officer pay, despite having surplus revenue. See below.

'Despite management's claim of declining revenues
in the last financial year, recently released financial
statements have disclosed a group wide increase
in surplus revenue as compared to the previous
year: £12.5 million, up from £4.5 million in 2011.
Even in supported housing, where employers
blame competitive pressures for driving down pay,
income has risen from £700,000 in 2011 to £1.2
million this year'
Winter 2012 Unite Newsletter.

well pointed out anon. There is no need to treat people in this way. Together with the way they have treated Island Homes, One Housing seem determined to the most mistrusted and disreputable Housing Association in London.

One housing group are complete rouges , we have a planning for 5 town houses on the isle of dogs , when one housing group took the transfer stock from tower hamlets , they say in there transfer that they have the benifits of the covenant that they restricting us from building 5 town houses and for them to release the covenant they want £275 ,0000 to release it , not so charitable now are they . crooks , isle of dogs has a shortage of housing they are a wage of space .

Any chance of a blog mention of the industrial action taking place at One Housing Group this week on the 19th 20th and 21st ?

will do anon - do you have any details apart from dates?