Reflections upon Breivik and our own Far Right 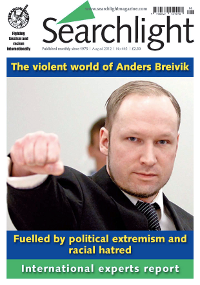 Picture is from the front page of this month’s “Searchlight” (the anti-fascist magazine). It’s just over a year since the massacre in Norway and the verdict on Breivik is due out on Thursday. Searchlight has commissioned a number of articles on about him and the Far Right. Some very good (some a little odd).

It’s clear to me that Breivik is clinically insane. You don’t go around shooting children at close range while smiling and laughing without being deranged. It is also clear though that he knows the difference between right and wrong. This means in Britain that he would probably be found guilty of murder. The law in Norway is different and he might be found to be not responsible for his actions. Either way I cannot believe he will ever be released.

Searchlight make the valid point that in this country while we are concerned with the threat of violence from Islamic extremists we seem complacent about the threat from the Far Right. I’m sure this is true. There will be similar egotistic sociopath morons out there in our green and pleasant land who think that the only thing that Breivik done wrong was just not to kill enough people.

Hat’s off to the people and government of Norway for the way they have dealt with this appalling crime.
Posted by John Gray at Tuesday, August 21, 2012

the far left and the far right are just the same. no difference = all murderers. they justify anything.

Breivik is a criminal, and a victim as he could not deal with multiculturalism. He is not insane (his lawyer announced insanity to give his client the best defence).

It could happen in Britain too. We have the BNP and EDL. The BNP were reborn, after the terrorist attacks of 9/11.

In many areas, the population of London has changed beyond recognition. Labour have had an open door immigration policy. A bit late in the day for Ed Milliband to apologise.

I take no comfort in the views of some British Muslims. They bring in spouses from overseas, some of them have been brought up with an education system which teaches children as young as 3 to kill the "enemies" of Islam.

Have you read the recent headlines where Christian homes being torched in Pakistan?. Why are Christrians treated as sub-standard?. Would we allow the homes of Muslims to be torched?

Britain gave asymlum, benefits and refugees to the Somalians. What did we get in return except for terrorist bombers.

The British government, should stop offering asylym seekers British citizenship. People in dire need should be given residency permits. As a temporary right to live. The situation in Somalia is improving, so this population could have returned back home.

I am sure there will be a day, when the Muslims in Bradford will demand a break-away territory....

Breivik is a "victim" what insane drivel? I hate what this Tory government is doing to this country but that doesn't give me the right to go to Eton and kill their children.

If I did only a complete idiot would think I was any sort of a "victim" who couldn’t cope with privilege.

We haven't had an open door immigration policy in this country since the 1960's. That was brought in by Harold Wilson of all people.

Yes there are a tiny number of moronic Islamic extremists in this country but an even greater number of racist fundamentalist Christian bigots. Haters who are so insecure in their own religion that they enjoy abusing anyone who does not share their fundamentalist beliefs.

What did we ever get from Somalians after centuries of colonial exploitation? More than we deserve. Ever heard of a Mo-bot?

Face it anon. You are a just a pathetic vile anonymous racist who is also an apologist for mass murder.

Do you "get off" at the thought of killing kiddies?

Bury your head in the sand.

Some 7m immigrants arrived on these shores during the last government's time in office and the mob denied it, didn't see it, talked about Olympian multiculturalism and said anyway, what does it matter, are you a racist?

"the mob" - your utter contempt for the British people and your hate filled extremist bigotry is blindingly obvious.

Thankfully, you will never get anywhere in this Country with such views.