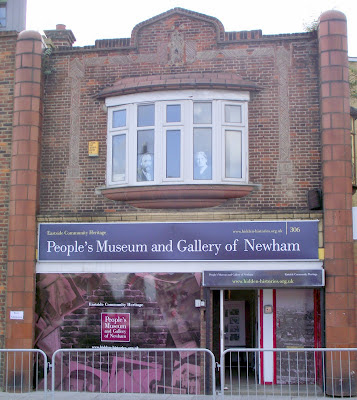 Peeping out of the upstairs windows are former local MPs Keir Hardie and Susan Lawerence. Welcome to the People's Museum and Newham Gallery, 306 High Street, Stratford, E15 1AJ. I stopped by on my way home from work on Thursday to visit.

The Museum is only about 5-10 minutes walk from Stratford station and the Olympic Park. It opened last month and during Games is usually open 11-5pm Monday to Saturday. It closes 22 October 2012.

Inside are various displays and multi-media exhibitions. There are a number of special events taking place including a talk on the 8th August 6.30pm by documentary photography Mike Steel; on 13th August 2pm long term East End Resident Ted Lewis on local history and 20th August 4pm Geoff Bell about the history of protest in Newham. There is lots of other things going on as well.

I'll post on Facebook some pictures I took inside later. The museum is actually the home of West Ham Labour Party.

Directly opposite the museum on the other side of the road is a modern day Newham protest. A Tamil Hunger Striker, Gobi Sivanthan and his supporters, who want an international investigation into the Sri Lankan War.
Posted by John Gray at Saturday, August 04, 2012