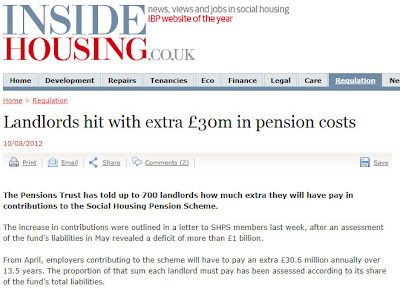 "Inside Housing" magazine today reports that the Pensions Trust has told 700 employers who are part of the Social Housing Pension Fund (SHPS) that they are facing a rise in
pension contributions of £30 million.

The Pension Trust runs schemes for "over 2,400 charitable, social, educational, voluntary and not-for-profit organisations". I imagine that all their defined benefit scheme employers will be receiving similar messages.

I posted the following comments in response on the Inside Housing website:-

"What employers should be saying to the Pensions Trust is why should they pay more when this so called "deficit" is a completely meaningless figure based on a discredited and outdated accounting standard? Which even the Government pensions minister describes as a "nightmare" and has promised to change?

Why isn't the Pension trust looking into the alternatives to simply raising contributions and threatening the long term sustainability of the scheme?

Why aren't they following the lessons learnt from the new Local Government Pension Scheme 2014 on how to keep contributions down but still offer a first class defined benefit scheme?