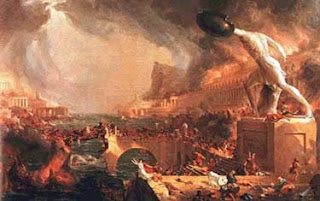 Well, that's okay then. Never mind perfectly sound pension schemes are closing left, right and centre. The Bank of England has looked into whether its ongoing policy of Quantitative Easing (QE) has any negative effects and has concluded the good outweighs the bad.

Apparently the fact that QE has benefited the rich (top 5%) the most isn't of concern to this Coalition cabinet of millionaires either.  I do wonder why?

The cut in gilts yields due to QE is helping to make many private sector DB pension schemes seem unaffordable and adding to the pressure for them to close. It increases the so called "deficits" which due to current abnormal 200 year market low conditions are already pretty meaningless.

This has nothing to do with poor investment returns or increases in life expectancy. This is solely down to a discredited and outdated accountancy measure ("mark to market") which the Bank of England is aware of but does nothing about and while the Government has promised not to idly stand by and watch good pension schemes go to the wall, so far, it has done nothing either.
Posted by John Gray at Thursday, August 23, 2012

Alaister Darling was supporting QE. Why did you say anything then?

The bank is printing money, so it can pay your wages. (Something Greece can't do).

We would not be in this mess, if it were not for the Labour's mismanagement of the economy. (Don't blame the bankers, you were too busy counting the cash, to notice how they got their cash).

Labour built an economy by creating fake / useless jobs in the public sector. Supporting a financial services, even though there questions were been asked. Don't forget you created a house price boom.

Labour ran the the country in a ditch. Labour councils are still playing dirty politics. You are creating problems for local people, and then blaming the probllem on the Government.

It is about Labour run councils, put their heads down and start working together to, get us out of this mess.

Labour run council are only interested in polical point scoring....

The government is being forced to raise the national debt by £600bn this parliament and still the mob cries: spend, spend, spend.

QE to stop an immediate collapse in the Economy is one thing. Not 4 years on. Its a one trick pony only economic policy which is helping to cause good pension schemes to go to the wall and also pensioners who rely on annuities to retire in poverty.

The Labour Government was very naive about role of markets and financial services. They won't be again.

It is time that the rich in this country paid their fare share. If they did we would not have any debt problems.

This government's policies are causing national debt to get worse. 1930's all over again. Invest to get the economy going. Plan B please.