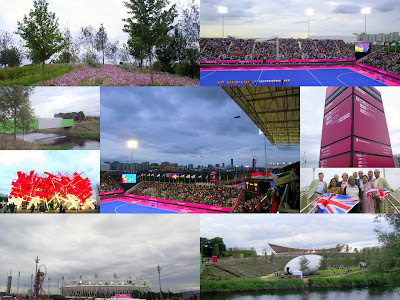 Yesterday evening I finally went into the Olympic Park during Games to watch the Men's Hockey quarter final, GB verses Spain. I went with fellow Newham Councillors and members of the Newham Youth
Council (and the current Young Mayor Abraham Male).

We came in via Eton Manor Gate at 5pm. I bumped into some current and former UNISON staff coming the opposite way from the Swimming. The first impression of the Park is how beautiful and spacious it all is - the flowers, the greenery and the waterways. The volunteers and staff were still cheery and helpful despite this being the second week. Everything seemed to be well organised and moving smoothly.  There was clear signage and was relatively uncrowded. Lots of things to stop and stare at. Drinks and food were expensive (£8 for fish and chips!) but I believe you can bring food in (not liquids). It all reminded me (favourably) of a Walt Disney theme park.

The Hockey match itself was fast and furious and at times a little fractious. The support for the GB team was pretty overwhelming and I felt a little sorry for the Spanish players and their drowned out supporters. During a break in play the stadium PA would ask the crowd "to give a cheer for the Spanish team". Which would result in a small cheer. Then he would ask for a "cheer for the GB team" which would result in a completely deafening and massive cheer followed up by a 4 man band playing "land of hope and glory". The weather was pretty cool and there was the occasional spot of rain. No one seemed to mind.

It was an exciting finish (even for non sporty me) and the final result was a 1:1 draw which meant that GB went to the next semi-final (Spain had to win to do so) which as you can imagine went down well with spectators.

The journey home went quick and straight forward and I was indoors within an hour. A special evening.
Posted by John Gray at Wednesday, August 08, 2012

Did you get the ickets through the ballot system or were you there in your official capacity, with tickets supplied by LBN?

OMG, they went for the same yucky neon pink colour. It reminds me too much of Newham....

I thought the park was beautiful as well. I didn't expect it to be so green and pretty.

John
What a great Olympics it has been so far. Everyone in Newham and East London must be very proud of what has happened. Well done, especially to the 70,000 Games volunteers. We are proud of you all, as well as our fantastic athletes, our armed forces protecting us, the Police and all the public servants serving the Games

Did you find out why the surface is blue and pink?