A Right to Die? Not yet 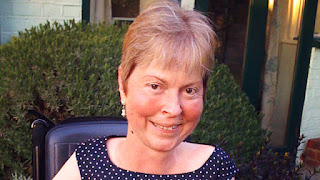 When I heard the news on the car radio last week that Tony Nicklinson had died of natural causes, I am sure that like everyone else, I was relived that his suffering had finally finished and he had got his wish to die. Tony was paralysed from the neck down after suffering a stroke in 2005.

He had described his life as a "living nightmare" and had gone to Court to be allowed the right to die. This was refused and the Court said this was a decision for Parliament to legislate about and not the Courts.

I must admit that in recent years I had been coming around to being in favour of giving people the right to commit suicide in such circumstances. However, earlier this month I heard the disabled campaigner Baroness Campbell (see photo) being interviewed on Desert Island Discs. Baroness Campbell has the incurable disease Spinal muscular atrophy. Her condition also means that she is prone to severe chest infections and often needs emergency care. At least twice when she has been in A&E the doctor has said to her husband that they "assumed" she did not want to be resuscitated.

That was one of the reasons why she is opposed to the "right to die". She told the interviewer Kirsty Young, that "when society values me as much as it values you" then we could have this change. Not until then.
Posted by John Gray at Monday, August 27, 2012

There should not be a right to die, as it will stop doctors trying to find solutions....

While I don't currently think that we should have a right to die I'm not sure that your comment is correct?

Every politician who votes against this bill should be kidnapped and tortured until they turn 150.

Anything less would be unwarranted mercy.

There is no easy answer.