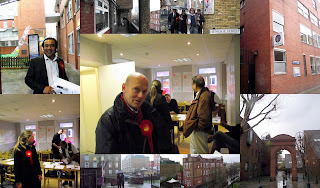 This evening I helped out the Labour Party campaign in Tower Hamlets where there is a council by-election in Spitalfields ward. This by-election was caused by the jailing of the former "Independent" Councillor (and supporter of the "independent" Mayor Lutfur Rachman) for housing benefit fraud.

Our Labour Labour Party candidate is Ala Uddin (who BTW sits on the Board of two Housing Associations). The campaign hub is in 68 Brick Lane above the office "Gram Bangla" only 5-10 minutes from the Aldgate tubes.

The weather tonight was pretty awful. Mostly rain, rain or more rain. Firstly I went out leafleting and got a little wet. Then I went out canvassing and got very, very wet. I knew most of the team and they were very welcoming and pleased to see a supporter from their sister borough of Newham help out but I did wonder a little if we were all playing an East End version of "chicken" in the rain. If I had not been there would this Tower Hamlets team have said "lets go and take shelter until it stops raining" but they couldn't say this in front of me? While at the same time I was thinking in Newham I would have said to the team "lets keep out of the rain until it slows down". But of course I couldn't possible let Newham down by being the first to suggest it to these Tower Hamlets bods!

The soggy canvassing for Labour actually went well. But turnout in this election is going to be key. I did have a honest conversation with one resident who told me that he and his family were Labour supporters but felt obliged by family connections to vote for the independent "mayor's candidate". They were postal voters who had already voted so I have my suspicions (but cannot prove) how this family had to prove their "loyalty".

Labour I think can win this seat if it can get out our vote. So if you can help tomorrow then please do, you will be made most welcome. Just turn up to the Brick Lane office. I am sure as well that the weather tomorrow will be absolutely marvellous (but take an umbrella).

(I have problems downloading pictures at the moment. Once I get this fixed I will upload a collage from tonight.  Now done)
Posted by John Gray at Wednesday, April 18, 2012

This, coupled with Galloway's victory in Bradford the other week, marks the emergence of something very unpleasant in British politics - the cultural/confessional party that attracts votes not on the basis of policy or ideology but on 'community loyalty' or religious identity.

A defeat is a defeat is a defeat - but only by 45 votes? Not that bad -less than 0.5% in a high turnout for a by election. This is in Lutfur’s own backyard. Come 2014 they will not be able to replicate the effort across the borough. While the Labour machine can. If I was an “independent” Councillor I would be worried by this result

Yes, it is worrying but it’s not at all new to British politics.

In fact well before “respect” various communities (Protestant, Jewish, Irish, Catholic etc) have gone through this process over the years? I am sure that Galloway will be kicked out of Bradford in 2015 and eventually real politics will return to Tower Hamlets.

You may now better than me, but I can't think of another example of a cultural/confessional party getting a seat in parliament, at least not outside Northern Ireland (which has a whole different political culture).

Sure, Alan Craig's tiny band of christianist nutters got a few seats on Newham council in 2006, but at London-wide and national levels they've got nowhere - even in alliance with other self-described 'christian' parties.

I hope you're right about Respect's long-term prospects, but Labour needs to do more than just rely on its superior GOTV abilities. Voters have to be persuaded that the party and its brand of politics has something to offer them. Back in the day we might have talked about raising class consciousness, but that probably went out of fashion with flares and tank-tops!

Sorry this is late. There have been issues in Scotland (in particular religious sectarianism in Glasgow) and even Liverpool. I can remember as a boy asking my uncle why the family supported Everton not Liverpool? I was told that the "Blues" were for the Protestants and the "Reds" the Catholics.

You are absolutely right that Labour cannot take anything for granted.

I'm not sure whether class consciousness will have a comeback. I think that a political consciousness around income inequality is more likely to resonate than the theories of long dead Germans.