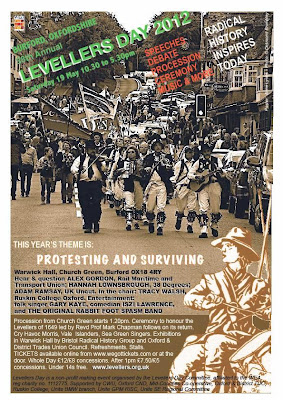 THE STORY BEHIND LEVELLERS DAY

Check out "The Levellers were a political movement during the period of the English Civil War. They were ahead of their time, with beliefs in democracy, religious tolerance, and social justice. It was the Levellers' highest ranking supporter in the Army, Colonel Thomas Rainsborough MP, who coined the movement's most enduring phrase, when he declared, at the Putney Debates in 1647: "For really I think that the poorest he that is in England hath a life to live, as the greatest he”.
Levellers Day commemorates a stand against dictatorship by Leveller soldiers in 1649 and its suppression by Cromwell. Over three hundred soldiers were locked up in Burford church; three were executed as ring leaders and buried in unmarked graves in the churchyard. A plaque commemorating them was placed on the church wall in 1979.

The words ANTHONY SEDLEY 1649 PRISNER scratched on the font of Burford church by one of the soldiers, can still be seen.  Levellers Day was initiated by the Oxford Industrial Branch of the WEA in 1975 to remember the Levellers and their ideals and to update and relate these to our own time through debate, entertainment and any other way that makes the subject matter  inspiring, educational and enjoyable. It’s held on the Saturday nearest to 17th May, the date the three men were executed. See  www.levellers.org.uk for more details and also facebook and twitter".
Posted by John Gray at Tuesday, April 24, 2012