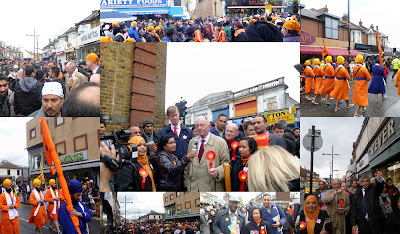 Yesterday afternoon Labour Mayor Candidate Ken Livingstone was in Newham for the annual march by Sikh's to celebrate "Vaisakhi" their New Year.

There were thousands of people in the procession and lining the streets. The rain held off and there was even sunshine. It was very colourful with drums and music. Food and drink given out for free. Ken was mobbed by well wishers and supporters.
Posted by John Gray at Monday, April 30, 2012

Would Ken have saved Queens Market?? Boris saved it last time. Newham Council has no idea how to do regeneration.

Yup, Ken should should admire the non-existent regeneration of Green Street. Ken boasts 'I bought the Olympics to London'.... Ken should be in tears!

what a load of old nonsense anon

Ken should be in Venezuela