Please don't vote to close nurseries...Vote for the Party that Cares 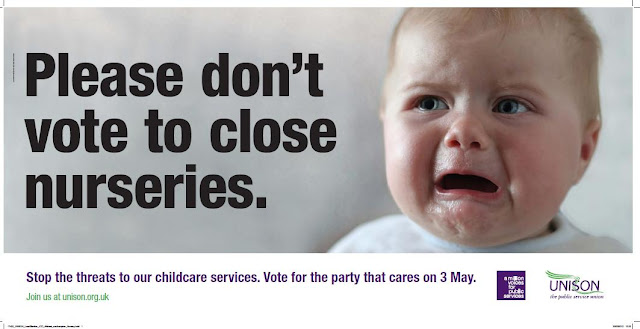 Excellent UNISON Billboard campaign launched today "calling on the public to vote for the party that cares about public services in May's local and mayoral elections in England....

"Voters across the country are being hit hard by public spending cuts. The unemployed young person who has lost the help they need to find work, the elderly person watching their social care services disappear, the low income family that has lost thousands in tax credits. Meanwhile, the richest 1% are in line for tax cuts in coalition Britain.

"In May's elections voters face a stark choice. Vote for the coalition parties and vote for cuts, or vote for the party that cares about public services. UNISON's campaign is aimed at making sure voters make the right choice at the ballot box in May."
Posted by John Gray at Monday, April 16, 2012

Very emotive image used in the ad but very short on the facts. Can you post some links to where this is happening ?
Thanks

thanks for the link. Just to clarify the ad refers to "nurseries" closing. To me nurseries are places you put your child in (and pay for) to allow you to go out to work, contribute to society and pay tax (if you are not a banker!)

Your link refers to "childrens centres" which appear to be a drop in centre for services that will still be available elsewhere. They are a nice to have but not essential. Direct Gov tells me that there are still 3600 of these in operation
http://www.direct.gov.uk/en/Parents/Preschooldevelopmentandlearning/NurseriesPlaygroupsReceptionClasses/DG_173054

47 closing would just be a normal churn you might expect for stuff like leases being up on premises, staffing issues and maybe not enough interest from the users.

I'm a governor at a nursery school which has a children's centre attached. They are really not providing child minding services but education.

There is no research that shows early years education is anything other than damaging. Very young children learn by having close and bonding relationships with their parents and siblings. Plenty of research shows that forcing ever younger children into institutionalised "education" stunts their language, personal and social skills and isn't good for mental health either.
How about supporting families instead? Oh wait...no...that would mean research based practice. No one ever does that.
Shell

don't be silly of course there is plenty of "research" into early years education that does not show this. You might think it’s wrong - but that is a different matter. Only a complete idiot dismisses evidence that doesn’t suit their own prejudices.

I understand that there is mixed evidence about the value of Nurseries up to the age of 3. But with Children Centres we are talking about supporting families and breaking the totally destructive generationally cycle of unemployment and deprivation.

Do you think that a young child in a playpen dumped in front of a TV at home 24/7 is a good thing? No, of course not. Like in most things there is a middle way.