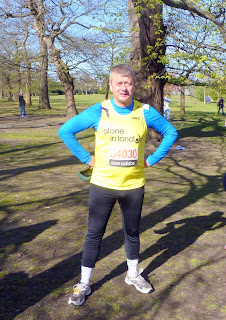 This is a picture of me this morning in Greenwich Park just before the London Marathon 2012. The calm before the storm. I did the London marathon in 2002 and swore afterwards never to do it ever again. But last year I thought "it wasn't that bad? surely its time to do another one". So I stupidly applied for a place via my employer with the Homeless Charity helping young people called "Alone in London".

The London Marathon is a great event. I would encourage everyone to take part (once) but 26.2 miles is a long, long way. Today it went okay for the first 13 miles then my legs went on industrial action and a "go slow". They refused to do what I wanted them to do. The only way I could get any speed up was by waving my arms like a cross country skier. Which didn't get
me that far.

I ran the London marathon in 2002 in 4 hours 24 minutes and the same thing happened then at the 20 mile mark. So I knew what to expect. I kept "running" (aka slow shuffle) and eventually finished 5 hours 37 minutes. Which was really slow but such is life as this is the last time I will ever run a marathon again ever! If in 2022 I say "hmmm...surely it wasn't that bad"... everyone has permission to shoot me or enrol me in the Young Conservatives ...since it was, it was :)


I simply didn't train enough long distance and I think I should have done more road running rather than footpaths.

On the plus side the weather was warm and sunny nearly all the way. The crowds of Londoner's lining the route were fantastic and they were really supportive. At Surrey Quays there was a UNISON support station where I got a free Fruit pastille from Cadet Swing. In the Isle of Dogs I met one of my fellow School Governors and her family.

Sometimes people were a little harsh on those who at the time were walking  rather than "running" but I think it was meant well.  Mind you I would have been faster if I ran/walked instead of shuffled.

It was I admit a bit embarrassing to be "speared" and then overtaken by runners dressed in Rhino costumes!  Also at the end I was running alongside someone dressed in a heavy (and must have been hot) Womble Costume. I thought that I must beat him to the finish. But he kept increasing his speed. However, he was distracted by a group of excited young female spectators and stopped to say hello to them giving me the chance to steam (slowly) past and cross the finishing line. Result!

You can still donate to "Alone in London﻿" by clicking below or you can send me an email with a pledge. I will keep this open for the next couple of weeks.
Posted by John Gray at Sunday, April 22, 2012

Ha> well done, John....only five mins behind Ed Balls....did he spear you as he passed as well?
V good career move letting him win like that.
At least you didn't end up in Stoke.

you hand out leaflets in Stratford and dont get prosecuted / fined.

But when people of other parties hand out leaflets, Newham Council attacks them.

You don't believe in democracy.

I assume Malik was done for littering not handing out leaflets? Is he really as stupid as he appears?