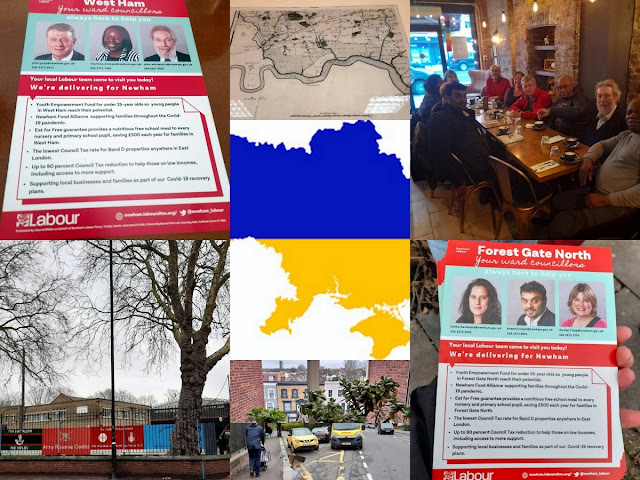 This morning I had my first "physical" Councillor surgery in two years at Stratford Library archivist room (a fantastic local history resource) then I joined a Labour canvass in West Ham Ward. While talking to residents about local issues they were also raising their horror at Putin's invasion of Ukraine.
We passed our local British Army, G Company, 7 Rifles, Reservist base, on the Portway (bottom left). As someone who spent several years in the then British Territorial Army, during the 1980's, learning how to try and stop Soviet Union tanks invading Europe, I am to say the least dismayed that we now face a similar threat from the fascistic dictator of Russia, Putin. I am confident that the men and women of 7 Rifles and their comrades will do their duty and protect us from Putin's aggression.
For once I did not pick up any individual casework (apart from general concerns about parking charges, recycling & ASB which I will feed back to Executive members). However, when cycling home I noticed that vehicles were parking and blocking any emergency vehicle access to the south entrance of West Ham Park (see bottom middle picture). I will raise this with the Park (run by City of London) and Newham Highways.
There is also a live local issue regarding plans by the Park to build homes at the site of the former planting nursery. Our West Ham MP, Lyn Brown has asked local Councillors for their views on this issue. I will suggest we have a meeting.
In the afternoon I joined Lyn, at a canvass session in Maryland, Forest Gate North with local Councillor Rachel Trip and activists.
It was another largely very positive canvass for Labour. Rachel picked up case work on housing disrepair and I found more residents angry and disgusted at the dreadful aggression against Ukraine.
Afterward we joined up with a Stratford canvass team and thawed out with hot coffee and treats provided by Lyn at a local café.
Posted by John Gray at Saturday, March 05, 2022