Labour Canvass - Maud Gardens then Olympic Park (a plaque to the Pentonville Five?) 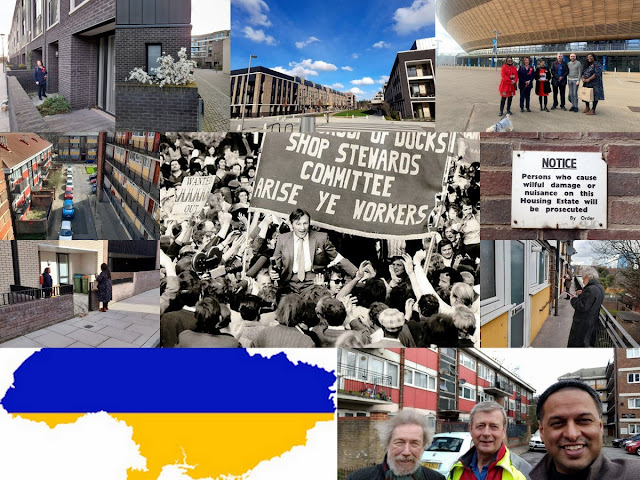 This morning I went on a Labour canvass in my ward, West Ham with my fellow Councillor John Whitworth and local activist Asheem Singh.
We went to Maud Gardens which is a small low rise housing estate. We picked up a lot of case work and issues. Residents were pleased to see us but the estate definitely needs a "refresh".
I will see where it is on the list for future planned maintenance programme. I was invited in by one resident who lives in a one bed flat, which has damp problems but also he and his wife has to share the only bedroom with his 10 year old autistic child, who was a lovely boy but obviously his housing situation is completely inadequate.
I will raise a Council members enquiry into what we can do, however, I really wish the Prime Minister or Chancellor of the Exchequer was with me when I make these visits, so they can see for themselves what real poverty and housing deprivation means to vulnerable families

By a complete contrast I went this afternoon with West Ham MP, Lyn Brown, to a brand new development next to the Queen Elizabeth Olympic Park, called Chobham Manor. Where there is new private and social housing which appears to be high quality and residents are generally very satisfied (despite concerns over lack of domestic bins and that google does not know they exist).

I believe this development is actually the site of an important Newham and Labour movement historical event. In 1972 five Dock workers were imprisoned for "unlawfully" picketing at a cold storage facility which I believe was located at or near this development. This resulted in an "unofficial" national strike across the UK which ended up with the "Pentonville Five" being released. This was a famous victory at the time against trade union oppression. Vic Turner (see centre picture of him being realised from prison) was one of the Pentonville Five and he later went on to be a Newham Councillor and Civic Mayor.

Lyn had a long conversion during the canvass with a resident who was originally from Ukraine. Our hearts go out to him, his family and friends and the people of Ukraine who are being murdered and suffering in Putin's war of aggression against them.