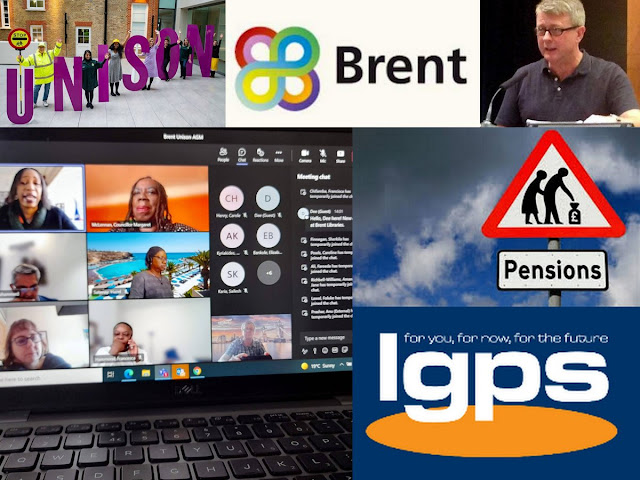 Today I had been invited by Brent UNISON to speak at their AGM on the importance of decent pensions. Well done to the branch for not only having the leader of Brent, Cllr Muhammed Butt speak and take Q&As but also its deputy leader, Cllr Margert McLennan.
I had been invited in my role as Chair of UNISON London regional pension network. Also, I had recently been appointed by the London local authority trade unions, to fill their seat on the shareholder Committee of the London Pension collective investment pooling vehicle (better known as the London CIV).
My aim was to remind trade union members in Brent how important it is to join and stay in the Local Government Pension scheme.
I began by recalling being a Council housing officer on an estate in Tower Hamlets in the early 1990s, I remember being horrified by pensioner poverty. So many of our retired residents were living in simply dreadful conditions. They had no spare money for treats, holidays or even decent presents for their grandchildren. Recent research indicates that in 2021 some 18% (nearly a fifth) of UK pensioners still live in poverty.
I also spoke about if you don't join the council pension scheme you miss out on "free money" since your employer is paying at least double what you contribute AND your income tax should be reduced.
Also, you get free life assurance and free protection against ill-health. If you are not in the Council pension fund and then die or have a serious medical condition, it is likely you, your spouse and your dependants will get nothing.
Sadly, I remember when a young man with a dependent spouse and 2 teenage children died in service due to an accident when visiting relatives. He was not in the pension scheme and therefore his spouse and kids got nothing, not a penny from the employer to help them out.
Please do not let this happen to you! If you are eligible join your pension scheme join today! If money is tight then consider what is known as the "50/50" option. You pay 1/2 your dues but get 100% life cover (but you only get 1/2 of what you should get from your pension - so only do this as a temporary stop gap)
There was a wide ranging Q&A with members including a discussion on decarbonisation of our pension funds and the need to do this via a "Just Transition".
Posted by John Gray at Tuesday, March 22, 2022