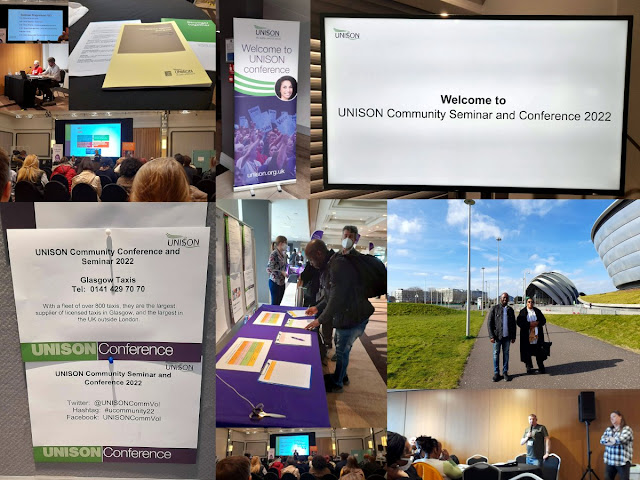 Friday was day 1 of the UNISON Community Service Group (Housing associations and voluntary sector members) annual Seminar and conference in Glasgow.
It was so good to have a physical in person conference and meet other delegates who I have not seen outside zoom or teams for 2 years or so. I was part of the Greater London Housing Associations delegation.
At noon there was a series of sector specific workshops. As you would expect I attended the Housing Associations workshop, where we had a very useful wide discussion on current issues and problems in our sector and what we can do about them.
However, someone who described himself as the "President" of UNISON also attended despite admitting (and then demonstrating ) he had little or no knowledge of Housing Associations. This man  must be an imposter since he has been dismissed by his employer for allegedly bullying/harassing 15 female UNISON members (and also men).
Nevermind the awful nature of these allegations, UNISON rules have never allowed someone who is unemployed to hold such an office, not least because we are a trade union representing members at work on their terms and conditions.
There was also workshops on the CVO sector and Major Charities. After these sessions there was a briefing for new delegates to the seminar and conference.
The seminar started officially at 2.45pm and there was a series of really interesting speakers on topical Community Service Group issues followed by Q&A.
Derby City branch Community UNISON members have posted a really good account of this session here http://derbycityunison.co.uk/2022/03/18/unison-community-conference-2022-glasgow-day-1/
Afterwards we had a London regional delegation meeting followed by a meal in a Spoons in
Sauchiehall Street. One of the London delegates mother was Ukrainian and she made it clear her hatred of what is being done to her family members  every time the TV screens showed pictures of the fascist monster Putin.
Posted by John Gray at Sunday, March 20, 2022