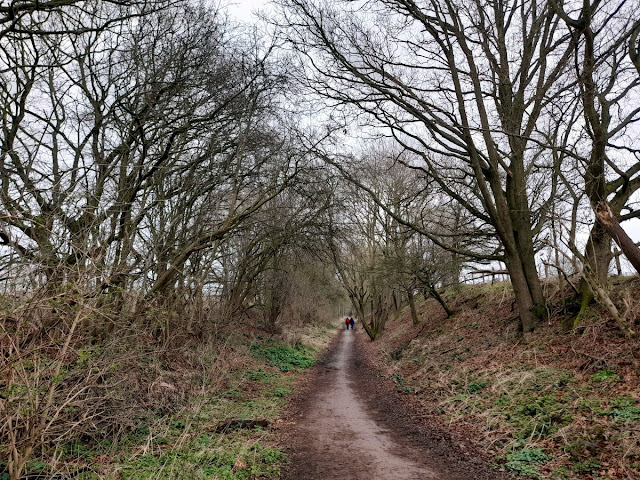 Off message but a nice if damp tramp today with Gill starting in Hertford. A http://www.pathfinderwalks.co.uk/our-books/pathfinder-hertfordshire-bedfordshire/ circular walk, some 45 minutes from East London by car and accessible by train.

As we started the walk it started to rain very heavily so we sheltered in the entrance to the Gatehouse of Hertford castle, which is now run by the local Council. As we were drinking coffee and eating scotch eggs, some council officers returned from a civic event and I had a chat. One of them was the Council mace bearer who remembered meeting the Newham Council mace bearer at a national meeting of Mace Bearers. Small world.

I was pleased that the gatehouse was proudly flying the flag of Ukraine in solidary with its people and that the chain surrounding the central cenotaph was wrapped in blue and yellow.

The walk was only 5.5 miles and there was a little bit of up and down but it was not that demanding. Some fine, open views of the Lea Valley. It rained on and off for a while but brightened up at the end. The Cole Way is an old railway line which has been converted into a 4 mile none traffic walkway.

We sat on a log in the "Grotto wood" just off the walk for a damp lunch. The Grotto was a romantic folly created in the 18th century and reminded me a little of Wansted Park but there are little remains.

We saw some magnificent birds of prey and a young fox, who we followed along a path for quite a while, until he turned round, saw us then quickly ran off.

Compared to our walk last weekend in the Chilterns, it was very quiet and we saw very few other walkers.

At the end of the walk we had a drink in the "Woolpack" in Hertford town centre overlooking the river. I did my normal trick of asking the bar staff what was their best bitter and they served me a pint of locally brewed McMullen mild which to my surprise (not being a mild drinker) was lovely.