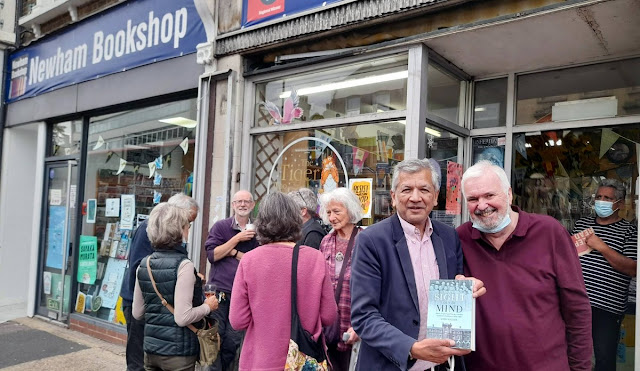 Thursday evening I went to the launch at Newham Bookshop of this work by local historian, John Walker. I haven't read it yet but I know that the story of this Victorian workhouse for children (which is only 10 minutes walk from where I live) is pretty horrific. There were similar institutions at the time up and down the land.

After signing copies of the book outside, John gave a talk about the book and what he found while investigating the achieves. He also pointed out the irony that the lodge (or gatehouse) of the workhouse was used to "allow" parents to see their children for an hours or so every three months (yes every 3 months!) which is now used by the local charity, "The Magpie Project" which supports families and children who are denied access to public funds outside institutions. The new so called "undeserving poor".

Check out https://www.newhambooks.co.uk/ where you can also order the book (Pub 26 Aug 2021 ISBN 978-1-7399142-0-2. £12.99 from all good bookstores).
Picture of John with our local London Assembly Member, Unmesh Desai, holding his signed copy of the book.
Afterwards a number of us went to the famous East Ham pub, The Boleyn, which has recently been refurbished and carried on discussing local Labour movement history.
Posted by John Gray at Friday, August 27, 2021