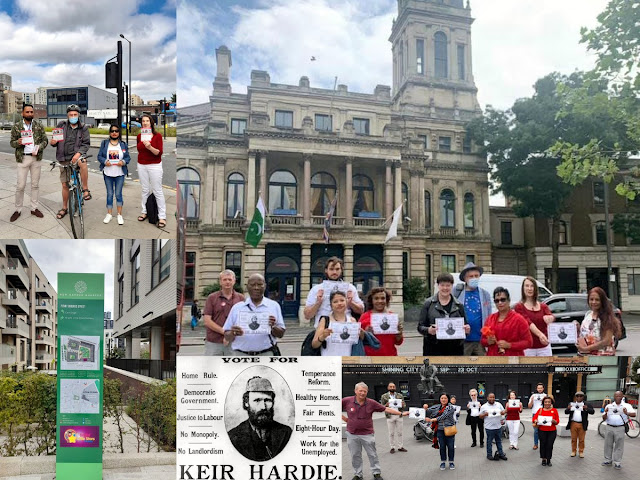 This morning there was a physical "Labour doorstep" canvass in Stratford, Newham followed by a celebration of Keir Hardie's Birthday (tomorrow 15 August) and his links with the borough. The Keir Hardie Society encourage supporters to post pictures to show his legacy as one of the most influential people in British politics.
Keir was elected as the first Labour MP in 1892 for what was then called the West Ham South Parliamentary seat.
The main picture shows activists holding copies of one of his election leaflets outside Stratford Town Hall where the election count in 1892 took place. Keir is reputed to have made his acceptance speech from the balcony to cheering crowds below.
Bottom right is a picture of activists outside the Theatre Royal in Stratford. In 1992 it premiered a production of "A Better Life" which was based on the life of Keir.
Many people commented on his election manifesto leaflet on how many similar problems face us nowadays such as the need for "Healthy Homes", Fair rents", "Work for the Unemployed" etc.
Posted by John Gray at Saturday, August 14, 2021