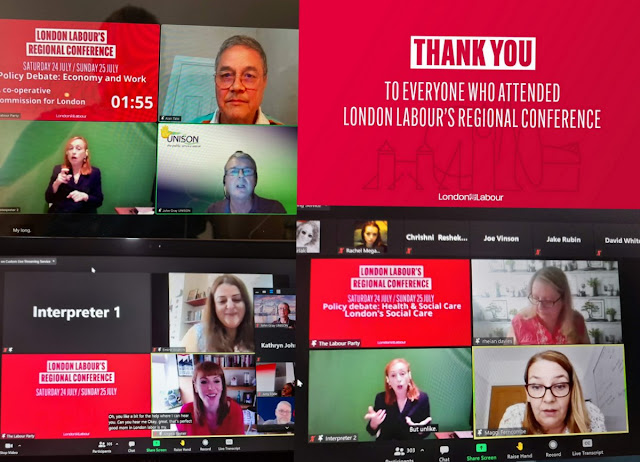 Last weekend was the Greater London Labour Party virtual AGM. I missed the Saturday due to some technical difficulties. I was able to join the second day on the Sunday as a UNISON political fund delegate (due to being Chair of the GLR Labour Link).

Angela Rayner MP,  the Deputy Leader of the Labour Party, was our inspirational  keynote speaker.  She gave a passionate speech about how this present Tory Government makes Margaret Thatcher look like a pussy cat and that we must come together to win a future general election, not least, in order to feed all our hungry kids.

The UNISON motion on Social Care was proposed by our Regional Secretary, Maggi Fermcombe (congratulations to Maggi for also being elected Chair of GLR Labour Party Board). I spoke to second the motion calling for the London Mayor to set up a Co-operative Commission. See my speech below:-

"Chair, conference, John Gray, from UNISON Labour Link, seconding this motion and welcoming this call to for the Mayor and the GLA to set up a cooperative commission for our City.

My longstanding UNISON comrade, Angela Rayner, reminded us this morning about the labour movement family and our shared history and values.  The cooperative movement is a vital part of our family

We are pleased though that there is an emphasis on a collaborative effect on this call for a commission, involving not only co-operators but also trade unions, voluntary sector and local government. As we are amongst comrades, let us accept, that there has been sometimes difficulties and disagreements between some supporters of particular co-operative models and trade unions - with Councillors often caught in the middle.

Conference, there are huge opportunities for genuine bottom up cooperatives in London, we have just passed a motion on good quality work in London, we all want these “good”jobs, but we also want new economic models, greater democracy  at work and the chance to build real community wealth.

We needed co-operatives in London before Covid and will need it even more, as we hopefully come out of it. Let us build collectively a model that suits and fits modern London, a model led by our Labour Mayor and Assembly members but co-produced with the cooperative movement, trade unions and local government. Conference, please support this motion".