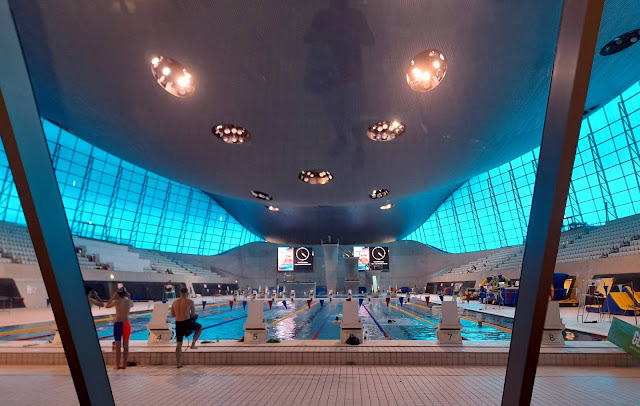 Picture of London Aquatics Centre (Olympic Pool 2012). After work this week I went for my first swim since Sept 2018 (I am amazed at this but Google timeline is pretty scary and insistent).

I have kept myself fairly fit during the pandemic but I need a goal to get fitter and also burn off excess "lock down" pounds.

Last Friday I met up with an old friend, who I used to go running with many years ago (Not anyone from Newham) for a meal in Covent Garden and (after several drinks) we agreed to take part in a self organised Olympic distance triathlon early next year (April/May).

Similar to the one I did with Newham's Terry Paul in 2016  , when we swam 1500m in the Aquatic Centre,  went on a 40k cycle ride to the Houses of Parliament and back again then went for a 10k circular run alongside the River Lea.

I will raise funds for UNISON's Welfare "there for you" and will throw open the challenge to Terry and others to join us.

Email ThisBlogThis!Share to TwitterShare to FacebookShare to Pinterest
Labels: London Aquatics Centre, London Olympics, Terry Paul, There for you, Triathlon