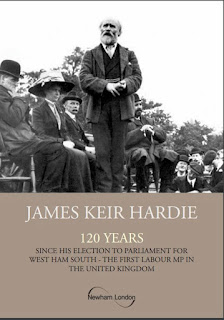 "August 15th marks the anniversary of the birth of James Keir Hardie. Every year the Keir Hardie Society celebrate with an online #HappyBirthdayHardie campaign - calling on supporters of the society to send pictures showing the legacy that belongs to one of the most influential people in British politics.Here are some of the best examples of the #HappyBirthdayHardie celebrations."
I will give this some thought on how to mark his birthday locally. In Newham we have a number of #KeirHardie related sites to choose from!
Check out this Newham Council booklet to celebrate the 120th anniversary of his election as the first ever Labour MP in 1892 for West Ham South.
Posted by John Gray at Saturday, August 07, 2021