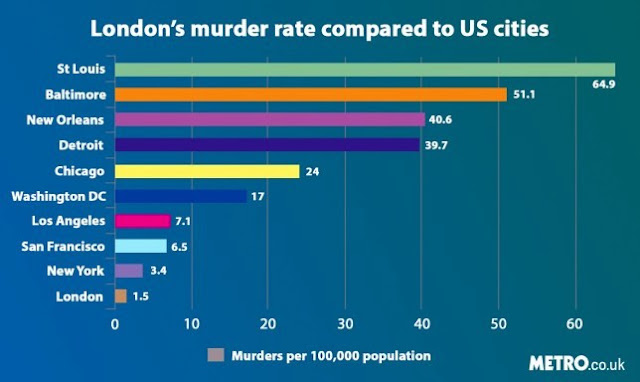 The level of deaths from knife and gun crime in London and other major UK cities is simply unacceptable and we must do everything possible to reduce it. This of course includes reversing the 20, 000 Tory cuts in Police numbers and the 23% cut in police civilian staff.

However, hat tip to the Metro for the above chart which shows the hypocrisy and cant of recent attacks by President Trump against London Mayor, Sadiq Khan.

US Cities murder rates are staggeringly high compared to London. Unbelievably high. New York is twice the rate of London, Washington is over 10 times as high and St Louis has a gut wrenching 64.9 murders per 100,000 citizens compared to London's 1.5.

My nephew is currently living in Chicago which is about 17 times more dangerous than living in London.

Will Trump be calling for all his US city Civic leaders to resign (followed hopefully by himself)? I will not hold my breath.

NYC has a Democrat as Mayor...and they have a crime problem too... funny that.

So when New York had republican mayors they had no crime problem??? hmmmm (thicko troll ALERT)

What was the murder rate under Boris? Same as Khan? Funny that...we can easily imagine your comments if Boris was currently Mayor...funny how every problem Labour have was the fault of someone else. Bit like Newham's services department...someone else's problem. How long has Khan been at the helm? ...and what signs of an improvement? Oh well....and..as you publish your views you should expect some examination of them. Casting anyone who disagrees with you as a Troll is naive. Try having a coherent argument and backing up your views...