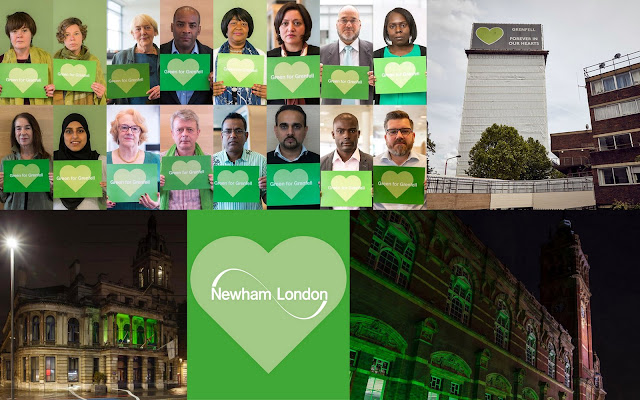 Newham Council has gone green for Grenfell to commemorate those who lost their lives in the tragic fire two years ago.

Both the Old Town Stratford and Newham Town Hall in East Ham were lit up last night (Thursday 13 June) in recognition of the anniversary and to show support for those directly affected by the devastating event that occurred on 14 June 2017. The Mayor and councillors also wore green to demonstrate their solidarity with the community.

Today (14 June) marks two years since the Grenfell tragedy where 72 people lost their lives after a fire broke out in the 24-storey block of flats in North Kensington. In the days after the fire, the Grenfell community came together in a great show of unity and support and an enormous amount of support poured in from across the whole of the UK. As part of the Green for Grenfell campaign, the campaigning group Grenfell United is asking communities and schools to come together to promote unity, spirit and resilience by wearing green.

Councillor John Gray, Deputy Mayor for Newham and Cabinet Member for Housing Services said: “We must never forget the Grenfell fire tragedy and this is why we are going green for Grenfell. We want to show solidarity with the community changed forever in the early hours of the morning on June 14, 2016. These lives must not be lost in vain. This must never happen again and as a council, we must ensure we learn from the mistakes made. The safety of our residents must never be taken for granted and is our priority. We have learnt valuable lessons and we must carry on doing all we can to protect our residents.”

Since the Grenfell disaster in June 2017, Newham Council has carried out significant work on all its tower blocks to improve fire safety. Three council owned tower blocks – Ferrier Point in Canning Town and Nicholls Point and Tanner Point in Plaistow North – all used Aluminium Composite Material cladding, the same material on Grenfell Tower. This material has been removed and a non-combustible material (EWI) is currently being installed on the three blocks. This work is due to end at the end of July and is funded in part by a successful grant from the Ministry of Housing and Local Communities.

Additionally, a resident engagement team was set up in 2017 to work with council tenants and leaseholders to ensure all the necessary safety measures were in place, both in communal areas an all individual flats and implementing anything further which might be required. The team has led on a robust programme of work in partnership with London Fire Brigade, visiting all blocks across the borough to carry out fire safety checks. This includes:

All Fire Risk Assessments to tall blocks are up to date and will continue to publish them on www.newham.gov.uk

The council also received a grant of £20,000 from London Fire Brigade to fund a range of fire safety equipment.