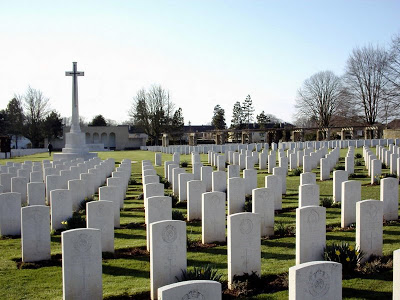 I posted this on the 65th anniversary on 6 June 2009. The current President of the United States is of course a rich draft dodger which in no way diminished the courage of the young Americans who died far from home on this day.

"I have been watching the moving TV coverage of the D-Day remembrance ceremonies taking place today in Normandy. While on holiday recently I read the book “Band of Brothers” by Stephen Ambrose.

I had never watched the original series on TV but my 16 year old nephew encouraged me to buy the DVDs when his father and I took him to the Normandy beaches for the weekend on his birthday a few years ago.

The book was even better than the Tom Hanks and Spielberg TV series in one way since it also told the story of the individual soldiers before (and after) the War.

The vast majority were very ordinary working class Americans, many of whom had known hard times during the “Great Depression”. The book is also a more honest account of the very human failings of individual officers and soldiers, who with incredible bravery parachuted into Normandy alongside their British, Canadian and French allies 65 years ago last night.

In these somewhat difficult economic and political times it is perhaps important to remember Ambrose’s conclusion that the proficient, well equipped and professional war-hardened German Army was defeated essentially because a democracy produced better soldiers and armies than dictatorships. The Americans were no more patriotic or braver than the Germans but freethinking liberal democracies produce soldiers with more élan, flexibility and imagination.

One example of this would be if they received orders that they thought were stupid, most of the officers, NCOs and soldiers would ignore them if they could. So despite practically none of the very young American airborne conscripts initially having any combat experience they defeated time and time again superior numbers of German troops.

Recently we have been quite rightly wallowing in our own political and economic class failings that we sometimes forget that democracy is of course the worse form of government - save all the rest.

(main picture is from the Bayeux British War grave)"
Posted by John Gray at Thursday, June 06, 2019