"What it's like to be on the receiving end of a violent attack..." Lynn's Story and UNISON Charter on Violence at Work 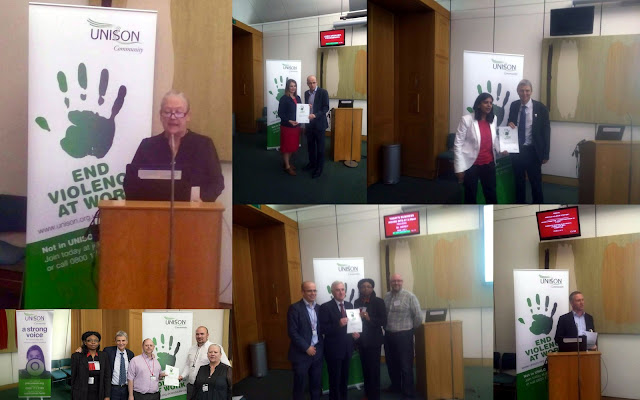 Yesterday there was a Parliamentary launch of the UNISON Violence at Work Charter for the 3rd Sector (Housing Associations & Charities). There was a number of MPs and employers who turned up to support the launch. The contribution by UNISON Member, Lynn Gillespie, at this event about her violent assault at work will be unforgettable to anyone who heard it.

"Hi. My name is Lynn Gillespie. I work for WM Housing and I’m a proud UNISON member and workplace rep. I’m here today to tell you what it’s like to be on the receiving end of a violent attack as a result of my work.

It is an accepted fact that those of us in public service have to, on occasion, deliver bad news or do something that may not be liked by our clients or customers . Sadly, this means there are occasions when people react in a violent or aggressive manner.

When I was a homeless officer I had a telephone, a chair and other miscellaneous objects thrown at me. I’ve also had a punch thrown at my face.

Thankfully, my husband was nearby and was able to protect me. As a result he received severe bruising to his back. I dread to think what might have happened had we not been rescued by two off duty firemen who saw the attack and shouted and as a result the assailants ran off.

That was in 1999, I was a tenancy enforcement officer by that time taking action against perpetrators of serious anti social behaviour. The impact on my family was more hurtful that my injuries as I could not see my daughters aged 5 and 7 for nearly a week as my face was so horribly bruised with a broken nose and cheekbone. They were spun a tale of mummy having ate something that did not agree with her that had given her an allergic reaction. They cried when they eventually saw me and that hurt even more.

What did help, was that I was totally supported at work by my manager who came to see me at home on the Monday as I had been due in Court and he took my court case from me and went to court himself. He was also armed with the largest bunch of flowers I had ever seen which as he pointed out would not take away the horror of the attack but hopefully would cheer me up.

My employers have always taken assaults on staff very seriously and we have an excellent internal reporting system in place for all assaults be they near misses, verbal abuse or threats or actual physical harm which thankfully does not happen too often. We do not hesitate to take action against the perpetrators and if they are our tenants we take action against their tenancy.

I am also proud to say that my employer, WM Housing, was the first organisation to sign up to the Violence at Work Charter having already put in place everything on the list.

Sadly, the stories from UNISON members in the Third Sector is that nowhere near enough employers take this responsible approach. Too many workers in the sector are being expected to put up with violent and aggressive behaviour, being told that it is part of the job. The Violence at work charter is my union’s attempt to draw a line in the sand. We say enough is enough. Committed charity and housing association workers, in fact, no workers, should be assaulted as a result of their public service.

Please go back to your employers and encourage them to sign if they have not already as we have to take a stand against this unfortunate fact of working life that affects far too many of us working in our sector.