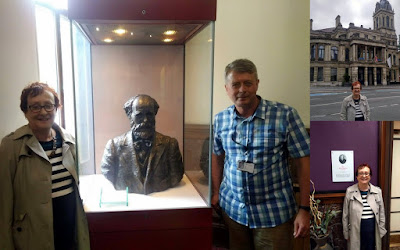 Yesterday I took my fellow UNISON NEC member (and NHS hospital worker) Mary Locke on a whistle stop tour of the Old Town Hall in Stratford.

Mary was re-elected in May as a Labour Councillor in Birmingham.

Mary is a huge fan of Keir Hardie who was the first ever Labour Member of Parliament. He was elected as MP for West Ham South on 4 July 1892.

In this town hall during the 1892 the election count took place in the main hall and Keir made his acceptance speech from its outside balcony to people gathered below in the Broadway. He was then taken on a victory procession to Canning town.

The old West Ham Council debating chamber is now called the "Will Thorne" chamber (see photo bottom right) in honour of another local MP (and Mayor) who was also a founder of the GMB union. Ironically, one of the founders of UNISON's predecessor union, NALGO, Herbert Blaine, was also a West Ham Council officer but he was also a Conservative Party National Agent!
Posted by John Gray at Wednesday, June 06, 2018