#UNDC18 “Housing Affordability is a growing concern for public services” 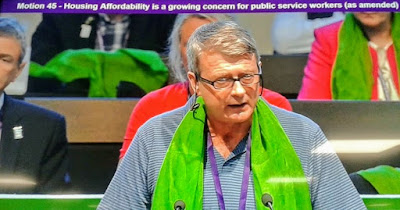 “Conference, President, it is unacceptable that public service workers continue to be priced of the housing market.

They are the heart of our public services and we depend on them to manage our lives.

Yet, their housing needs are frequently overlooked by central government policy.

Conference, the Grenfell tragedy rightly changed the debate on housing.

It highlighted that the government needs to listen and act on the concerns of tenants and residents about the safety of their homes.

It brought into sharp focus the state of the nation’s housing crisis and the need for the government to invest more in maintaining our national housing stock as well as building quality social rented homes to meet rising housing demand.

But while the housing narrative has shifted, government policy has not.

It remains wedded to stimulating private sector house development, which only benefits the privileged few. That is those on higher incomes and the wealthy.

While the low paid, vulnerable, young, single adult men and women, elderly and homeless are left to chase fewer low quality homes at the bottom end of the market.

Conference, it is a scandal that government policies continue to attack, dismantle and stigmatise social housing.

Funding for social rented homes has been drastically cut since 2012 in England.

While in each of the devolved nations – housing investment has increased.

In 2016/17 just 1,102 , 1, 102 homes were delivered for social rent with government grant in England, leading to the lowest number of new social rented homes since records began.

These losses have happened because the government have tried to stop housing associations and councils from building homes at social rents.

It has happened because the government promotes the controversial policy of converting existing social homes to rents at 80% of market rates, which isn’t affordable at all.

It has happened due to increased sales of homes through the Right to Buy policy.

No wonder that social housing is now the smallest sector, making up just 17% of households after private renters (20%) and owner-occupiers (63%).

Conference, do not be complacent about this if you happen to live in a relatively low rent area. Due to the crazy zombie market economy we live in things can change very rapidly. I have lived in East London for the past 30 years in a borough that traditionally had the lowest property prices and rents. In the last 6 years rents have risen by a staggering 47%. While house prices have gone up by 344% since 2000. Ask yourself Conference. Where will your children and Grandchildren live in the future?

Our members work tirelessly to keep our public services running and efficient.

They deserve the right to access a decent, affordable home near their place of work.

Conference, the motion outlines key demands to end the dismantling of social housing, and for a fairer housing and welfare deal, which will ensure a safe, secure, decent and affordable housing for all – and not just the privileged few.