#UNDC18 Motion 59.1 Privatisation and PFI - Building the Campaign (aka No to Moody Mutuals) 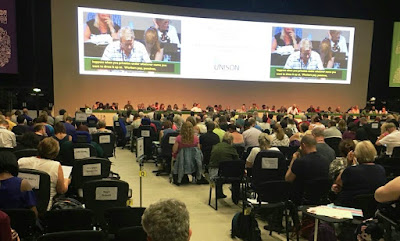 President, Conference. John Gray, NEC, speaking strongly in favour of amendment 59.1 and against the privatisation of our public services by so called "Public Service Mutuals".

However, "Public Service Mutuals" are not and never can be genuine co-operatives. Real co-operatives are bottom up, formed by grass root workers in order to tackle exploitative employers not to replace democratic and accountable public services. The international definition of cooperatives states that a real Coop is an “association of persons united voluntarily”. Note the word voluntary, staff are being forced into Public Service Mutuals against their will so they can never be cooperatives and no one in the Co-operative movement should support them.

There is one reason and one reason why the Tories are planning these dodgy Mutuals and that is a political one. The Tories want to privatise all public Services. councils, schools, health services - everything. This attack is ideological.

And let us spell this out to our friends in Co-operative movement who may be taken in by this. In unison we have a long, first hand and bitter experience of what happens when you privatise under whatever name you want to call it. Workers pay, their pensions, their holidays, their sick pay is cut, cut and cut.

Cutting pay, terms and conditions of its is the only way they will save money and if they didn’t they will go bust and be snapped up by bigger for profit privateers.

Ironically, in recent years there has been a minor revival in directly employed public services. With many local authorities (even Tory Councils) realising that they can save money by economies of scale and take control of services by bringing them in house. Direct Labour organisations such as APSE have produced stacks of reports and evidence on how you can keep services in house, improve quality and save money.

Conference, we want to work with the cooperative movement and we want to support and grow genuine cooperatives but we will not tolerate or accept privatisation however it is dressed up and we will call it out and tell it as it is.