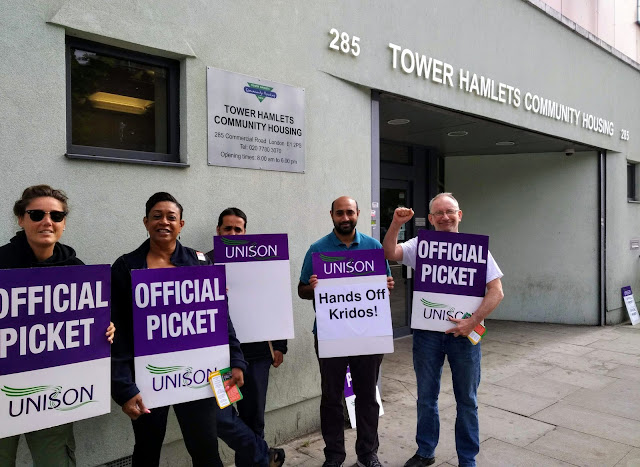 Early this morning I went to the UNISON picket line outside the headquarters of Tower Hamlets Community Housing (THCH) to show solidarity and support for the strikers. In my roles as UNISON London Housing Associations branch secretary, Regional Council Officer and NEC member for Community.  I also passed on a message of support from last night's ward meeting of Forest Gate North Labour Party.

Management are attacking pay at THCH and have obviously wound up staff so much that they have voted for 2 weeks of all out strike action. Which is pretty much unheard of in the sector. Most of the strikers were delivering leaflets on the dispute to the surrounding THCH estates.

There is a solidarity picket on Monday morning from 8am (11 June - at THCH HQ which is 285 Commercial Road, E1 2PS near Watney Market). There is also a public meeting at 4.15pm Tuesday 12 June at Oxford House, Derbyshire Street, Bethnal Green, E2 6HG London.

It was also good to meet former colleagues again who used to work with me in Tower Hamlets Council.
Posted by John Gray at Friday, June 08, 2018