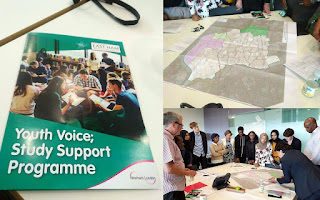 On Friday afternoon the Newham Mayor, Rokhsana Fiaz and her Cabinet (including yours truly) met the Newham Young Mayor ,Tomiwa Akintunde and the Youth Council.

After introductions were made we talked about the Young Mayor's projects especially the support for students studying for exams and also mental health issues affecting young people. I offered to attend a future meeting of the Youth Council to discuss housing for young people in Newham.

We then had a meeting in the Mayor's office to discuss the forthcoming review of Newham Council ward boundaries to reflect changes in population. While overall the population has risen, I was astonished that the population of Royal Docks ward had decreased by 20% since 2008.

I wish that I was as articulate and confident as these young people are when I was a teenager. They do Newham proud.
Posted by John Gray at Sunday, June 03, 2018