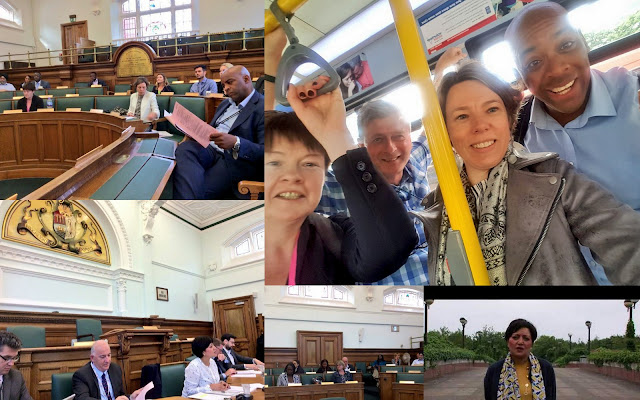 This was the first cabinet meeting of the new administration which I thought went really well. Making actual executive decisions is a very different experience to being a backbencher Councillor.  It is a more than a little strange how quickly you get use to change.  I also like the fact that four of us took a bus to this meeting from Newham Dockside.

See what the Newham Recorder thought about some of the key issues below:-

At Tuesday’s cabinet meeting, members rescinded the cash earmarked to build the pitch at the Memorial Recreation Ground in West Ham.

The plans were passed under the borough’s former mayor Sir Robin Wales weeks before May’s election.

However the plan was called in by the scrutiny committee when councillors suggested the huge sum could be “better spent” elsewhere.

Mayor Rokhsana Fiaz, who was a member of scrutiny under the last administration, approved the recommendations and said the council will be looking at alternatives ways of spending the money.

Cllr John Gray, cabinet member for housing, said this was the first time the scrutiny committee had been successful in stopping something in its 12-year history.

He added that it was good to see the committee “have some teeth”.

(JG It was made clear that the Rugby club may still get the money pending a new review of Parks and Leisure. The monitoring officer said that Scrutiny structure had been in place for 17 years!)

"Newham Council has “reluctantly” passed plans to build a free primary school to serve one of the borough’s largest new developments.

The new free school at Royal Wharf was given the green light by mayor Rokhsana Fiaz on Tuesday night.

The school will serve the Royal Wharf development, which will have more than 3,300 homes when finished.

The Britannia Education Trust, a charity which also set up the Britannia Village Primary School in Silvertown, has signed on to run the facility.

Free schools are a type of academy set up by parents, teachers, charities or businesses and funded directly by central government but independent of local council control.

Earlier this month Ms Fiaz said she had “significant concerns about the government’s policy of academisation and the lack of accountability this type of school structure creates for local communities”.

However, the cabinet said it was “urgent” the school was set up to take its first intake of pupils by September 2019 and the free model was the only way of achieving this.

Councillor Julianne Marriott, cabinet member for education and children, said: “This development already has around 2,000 people living on it and will have roughly 8,000 people by the time it is finished.

“We have no choice to agree this proposal to ensure our children can attend a school near their home and we fulfil our duties as an education authority. But it is a travesty that the only way we can have new schools in the borough is through free schools.”

Ms Fiaz added: “We will be bringing forward the full council motion on academies to the July cabinet.

“We will be asking government to enable us to build our own schools where demand determines it, give local authorities more powers to take over failing academies and to enable schools to return to local authority control.