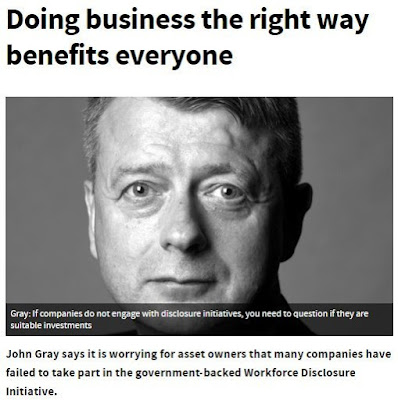 "I don't always agree with Conservative ministers, but I did at the launch of a report last month on the Workforce Disclosure Initiative (WDI), where minister for international development (who funds the WDI in partnership with Oxfam) Harriet Baldwin MP said: "If we want to eliminate poverty in all its forms then the world needs to create jobs and that creation happens by investment.

But those jobs must be good jobs without labour rights abuses. Too many people in the world are physically and mentally impacted negatively by work. Doing business the right way benefits everyone."

What the WDI has done in its pilot year is to ask 75 global companies how they manage their workers and, by this disclosure, it hopes to mobilise institutional investors to push companies for better jobs. One of its recommendations was that there should be as much reporting by companies on how they treat their workforce (including their supply chain) as on climate change.

The launch was not only about treatment but also the future of work itself. The opportunities from technology but also the dangers. I enjoyed the ‘tale' by the WDI executive chair, Richard Dickinson, who in his opening remarks said: "A Ford motor manager shows a union leader around a new car assembly line made up of robots. The Ford manager says he would be interested to know how the union will get union dues from robots. The union leader replies by saying he would be interested to know how robots will buy cars."

The initiative seems to be gaining momentum. In July 2017 the campaign had the backing of 79 investors with $7.9trn of AuM. In April 2018, 96 investors with $10trn AuM were backing the WDI. I am a trustee of a pension fund that has backed the initiative. The companies that responded to the initiative are commended in the report for their efforts and providing examples of good practice.

Despite the perceived success of those who did participate, only 34 out of the 75 global companies agreed to take part, which as an asset owner makes me wonder why? There could well be legitimate reasons but, for the life of me, I can't understand why they would not support an initiative funded by the British government, supported by respected international organisations and backed in many cases by their own shareholders?

At the meeting, Janet Williamson from the Trades Union Congress (who is also a pension trustee) said: "There is a high road to profitability and a low road. In the short term you can make profits from treating your workers badly. The high road is better. Sustainable profitability is via the high road."

If, going forward companies, still refuse to participate in the WDI then you need to question whether or not they are suitable for your fund to invest in. Obviously, you will have to take professional advice, but if they don't want transparency with regard to the way they treat workers then you have to consider are they equally keen to avoid scrutiny on other important governance issues such as boardroom pay or environmental impact?

One thing that I did point out at the launch is that while the UK is clearly not as bad as many developing countries in the way companies treat workers, we must get our own house in order as well.

In my daytime job as a trade unionist, I represent workers in the UK who live in poverty, have insecure employment, awful housing and feel hopeless and betrayed. Unless we clean our own house, concern for those overseas may be seen as crocodile tears.
Finally, I assume it was not coincidentally that the launch was on May 1 - otherwise known as International Workers' Day.
John Gray is a pension trustee and chair of a local authority pension committee. He is writing in a personal capacity only.

Hat tip Professional Pensions (and Eve for stealing from her excellent notes of the meeting)
Posted by John Gray at Monday, June 11, 2018