West Hammers "on the knocker" for Janet in Lewisham East 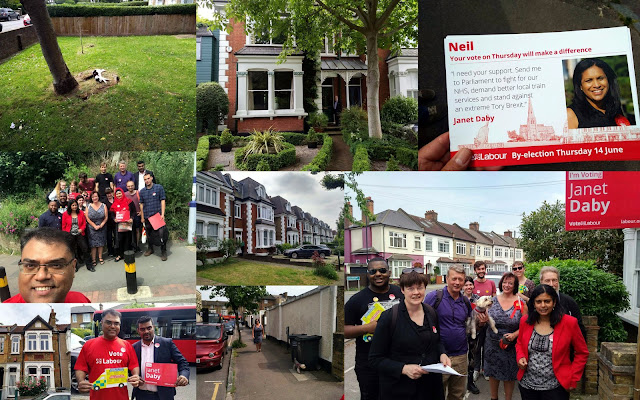 Picture collage from this afternoon's campaigning by (mostly) West Ham Labour in support of Janet Dady, Labour Parliamentary candidate for the Lewisham East by election.

Our team was joined by our MP Lyn Brown (and by Cara - her Labour Attack Dog). Ealing Central & Acton MP Rupa Haq also joined us. It was great to have 2 UNISON member MP's campaigning for the election of another UNISON Labour candidate.

The canvass returns for Janet were very good apart from a very few residents unhappy at Labour policy over Brexit. Which as a committed "remainer" I personally can understand but I also find incredibly frustrating since Labour is the only party with a chance of power who is committed to a pragmatic "soft" Brexit.

The vast majority of people I spoke to did not mention Brexit at all and were more interested in traditional Labour issues such as opposing cuts to Schools and the NHS.
Posted by John Gray at Saturday, June 09, 2018