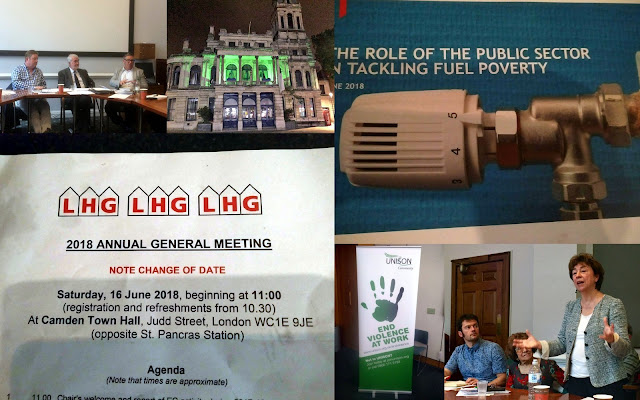 This morning I went to the AGM of the Labour Housing Group which took place at Camden Town Hall. The LHG is a socialist society affiliated to the Labour Party, which as the name suggests, is a forum concerned with the political development of Labour housing policies and issues.

The Chair, Paul Eastwood, gave a powerful introduction stressing the national housing crisis we face with 120,000 children living in bed and breakfast, Councils spending £500 million on temporary accommodation, 200,000 private sector tenants reporting being abused or harassed by their landlords and tenants being described as "vermin" by so called "eviction services".  I can only agree with his comments with regard to Grenfell that "the sad fact is that it seems people have to die before housing gets the attention it deserves".

Treasurer Ross Houston reported that the LHG is setting up a new website where members will be able to join online.

I asked the officers how we can set up at Newham Branch of the LHG and was very encouraged by the positive reaction. I will email the secretary to start this off.

Our first guest speaker was Alastair Mcintosh, Chief Executive of the Housing Quality Network who is always a provocative but entertaining speaker. His beef is with the dismal and sectarian nature of English housing players which are dominated by "rutting stags" compared with the more collaborative approach of for example Welsh housing professionals. He (like me) wondered what is going on with Notting Hill Housing Trust holding a fashion launch on the same day as the first anniversary of Grenfell?

The next speaker was Michael Ware from a corporate finance practice on the role of the public sector tackling fuel poverty by micro generation and energy storage. This presentation was very powerful but completely new to me so I think I need to get advice from our officers on this but it seems something that all of us in the public sector need to think very seriously about it.

I had to leave early to go on a visit to a resident so missed the after lunch sessions (guest speaker Nicky Gavron from London Assembly) but have stolen the pictures from Cllr Ross Houston on his facebook. I have also added pictures to the above college from Stratford Town Hall being Green for Grenfell and the UNISON campaign against violence at work.