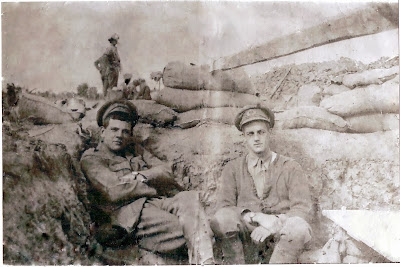 Yesterday morning I went to the Remembrance Sunday Service at West Ham Parish Church of All Saints. This is in my Council ward  and at 1,000 years is one of the oldest buildings in Newham.

The Church is currently undergoing a major programme of restoration with scaffolding everywhere but it still retained its solemnity and dignity.

The Revd Stennett Kirby led the service and our local MP Lyn Brown gave a Bible reading. Following Reveille, the Kohima Epitaph was given by an elderly veteran whose slow, deliberate rasping voice made all of us think of those who gave their today for our tomorrow.

Wreaths were laid with respect by the dignitaries, British Legionaries, serving soldiers and cadets. The most touching was the last which was laid by a little girl of 3 or 4 who had to "persuaded" by her Mum and encouraged by others, to go up and lay her little wooden cross with a red poppy on it.  But what was lovely is once she had finally done this, she turned round and skipped her way back to her Mum across the Church.

The address was made by Rifleman Franklin Anolue, 7 Rifles, G Company, West Ham who was in his Army Battle dress.  Franklin had recently served in Helmond Province in Afghanistan with his regiment. He told us he had always wanted to be a soldier ever since he saw the film "Saving Private Ryan". He was a student studying engineering and a part time soldier with the Territorial Army. He hadn't told his Mum he was going to Afghanistan until he was there, since he knew she would try and stop him! He had gone to Remembrance services before he went on his tour of duty but it is only now that he can really understand why it is so important to remember all those who put themselves in harms way for their country.

Remembrance Sunday takes place on the 2nd Sunday of November every year. This morning I went to the out door Armistice Day Service at the Central Park Cenotaph in East Ham which takes place at the anniversary of the end of World War One, at 11am on the 11th day of the 11th Month.  This was another very moving service. What was particularly important to me was the number of children from local primary and secondary schools who attended and participated in the service.

Also the emphasis on the "forgotten" Commonwealth and the absolutely vital role played in the First and Second World War by Africans, Asians and Caribbeans who defended our country and our freedoms.

The picture above is of my Taid (Welsh for Grandfather) in the trenches during the 1st World War.  He is sitting on the left and I think the picture was taken in Gallipoli where he served in Hawk Battalion, Royal Naval Division. This is a smashing photograph of my Taid. Dan Filson on FaceBook thought he looked like a 1950's teddy boy! Which I am not that sure about but having "attitude" may explain why he survived being on the front line in Gallipoli, Flanders and the Somme for 3 long years. He won the Military Cross in 1917.
Posted by John Gray at Monday, November 11, 2013