West Ham Ward and the Cost of Living Crisis 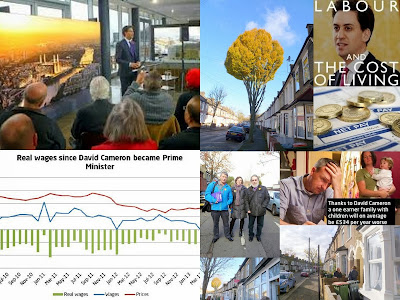 Last Saturday I was out canvassing in my ward with local West Ham members (and Labour Candidates 2014)  John Whitworth and  Julianne Marriot.

The weather was dry with blue skies but it was noticeably cold.

It is strange how there tends to be particular topics that dominate a canvassing session. That day it was the Cost of Living.

At the one of the first houses I called at a young mum with two toddlers running around her legs gave me an ear bashing about Council tax bills. How some months her salary just runs out and there is no money to pay for food for the kids and the Council tax. She works for the civil service and has had just a 1% pay rise in the past 4 years. While bills and the cost of living has gone up and up.

After getting a summons last month from the Council for non payment she had to run up and down the high street to get £100 payday loan to prevent being taken to Court. I tried to explain that in Newham Council tax was low and there had not been an increase for a number of years.  Due to Government cuts it was vital that we get in as much Council tax as possible in order to pay for the local services. After a difficult start we left on fairly decent terms.

Getting an ear bashing from time to time for something you have little control over is good for anyone in an elected position.

Next difficult conversation was with a resident who had voted Labour in the past but was unsure next time. He wouldn't say what had changed his mind but did say he needed to support a Party that would increase his income the most. I gave him the Labour leaflet on the promise to freeze energy bills if elected. He said that is fine but he wants help now - not in 2015. We eventually came to a sort of agreement that despite mistakes, Labour was still the Party for ordinary working people while the Tories favoured the better off.

I'm not sure he was that convinced but at least we had a conversation on who can deliver for the majority and not the minority.

A little while later I met a pensioner who was worried about paying his electricity and gas bills. He was waiting nervously for his winter fuel payment. He was more impressed with the Labour promise to freeze energy prices but since he was wearing several layers of warm clothing and a woolen hat indoors it meant he needed help now as well. The fact that it was cold that day made you realise the important of heat. According to this report there are 5 million households in the UK in fuel poverty.