Ed Miliband and the Cost of Living Crisis 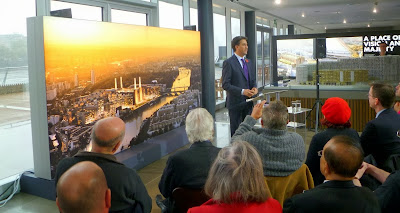 On Tuesday I went to Battersea Power Station (for the first time) to listen to Labour Leader, Ed Miliband, launch his latest attack on the "Wonga Economy" and the cost of living crisis in this country.

I assume that that this iconic London venue was chosen to reinforce the argument about the on-going rip off by the privatised energy companies of the British public?

There was a mixed audience of ordinary local Labour Party members and the media. Below are some of what I thought were his key points.

Ed spoke about meeting "Pay Day" loan victims, who are in absolute dreadful state, being bullied and exploited by these companies (many of whom I would point out finance the Conservative Party).

"...In this country a few at the top do very well, while everyone else struggles. Growth without general economic prosperity is not enough. Ordinary families are doing worse on pay while Chief Executives have up to 7% rises! Need to restore link between living standards and growth. This government is wedded to a race to the bottom. Supporting poverty wages and insecure zero hour contracts.

...Exploiting migrants as well as British workers. But they won't do nothing since they don't believe in intervening "in the market". But all markets have rules and if these rules are broken or allow exploitation then the government needs to intervene....

This government regularly intervenes into the market to reduce employment rights and therefore decrease wages.....

We have the slowest "Cameron" recovery in 100 years. New jobs tend to be low paid, part time and insecure. The government thinks we have to compete with India and China by cutting wages to their levels....

Working Britain needs a pay rise! One in five workers live in poverty on less than a living wage. Most children who live in poverty in this country have parents who are in work......

If we pay more to those in work then we the taxpayer will pay less out in benefits. Labour will fix markets when they broken. The Tories use to know that they had to do this. Battersea Power Station was built by Tories who knew that the energy market at the time was broken and they had to intervene....."

Ed's ended his speech by making it absolutely clear that a future Labour Government will intervene in "broken markets".

In the Q&A I asked the first question to Ed about the role of employee representatives on company remuneration committees in tackling unfair pay, as they do in nearly all our competitor countries in Europe. Ed confirmed that the Party in government does intend to make sure that there is such representation. Employers wanting unfair pay rises for themselves should have to look their employees representative in the eye when asking for this.

The media were on the whole pretty awful during the Q&A. They ignored the issue in hand and were obsessed with Falkirk and the role of Unite the union. Their questions to Ed were mostly puerile and sneering. One so called journalist asked him how scared he was of Unite on a level 1-10? How pathetic.

While I am very proud of our tradition of free speech and a free press in this county I wish more people could see how ugly and ignorant these people are.  There was plenty of possible hard and difficult questions on what Ed had just spoken about but they were just too lazy to think of them.

Anyway, I think this speech is really significant and is part of the repositioning in politics by Ed and the Labour Party, as it resumes its historic mission to save capitalism from itself.

You can watch the speech here on Youtube or read it here on Labourlist.
Posted by John Gray at Sunday, November 10, 2013