Payday loans v Bank loans - between a rock and a hard place? 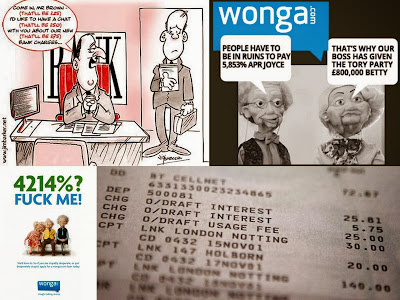 Following this post about Ed Miliband attacking the "wonga economy", I have been having the really important debate below via Facebook private chat with a UNISON member struggling to bring up her kids and pay the bills.

I think it is really important that we don't demonise people who in the real world feel forced to take out pay day loans and instead concentrate more on getting the Banks and credit unions to raise their game.

"Hi John: Hmm ... just
had to pitch an alternative view before Milliband and all do anything stupid with payday loan companies ... of which Wonga is only one! Last month a friend went over her overdraft limit with her Bank by £61 for about 5 days ...got a letter and have been charged £61!!!! Same amount with a payday loan company would have been approx £15-£30!

And yet we're told payday loan companies are taking advantage? Really?! I feel strongly that the focus is being put that payday loan companies are the bad guy in this. Actually they're filling a gap that has been forced between banks and loan sharks. There is no middle ground. You're either using banks or your not. Once you cross the line it's very hard to get back into 'main stream'.

Many of the people making these judgements probably have never been in a place where they can't use the bank, don't have access to easy credit. What happens when you contact your bank to tell them you've been made redundant and ask them for help. Redundancy money is due but won't be in for a few weeks. Their response is far from helping you ... instead they remove your overdraft of £500 with no notice, your mortgage is due out, .. you have £10 in the bank. Your credit card has a couple of hundred left on it. You call them and ask if you can bump up your limit and get told no. .... what are you going to do now? Where can you get money? You have to pay the bills, you need fuel in the car.

You may choose to skip a payment to make ends meet ... now your credit rating is at risk. But choice of food or concern of credit rating? You take the food. But then you start to get on your feet. People now won't lend to you because you're a credit risk. Then your car has a major malfunction. You need it to get to work. It's going to cost £300 to fix. Then you start to look for the alternatives ...

There's a chap down the pub who buys jewellery ... there's a pawn shop in town ... there's a payday loan who can give you £300 now ... it's in the bank in 20 mins and you can pay the bill. It'll cost you about £70 but if you bounce your bills instead each dirct debit will cost you £25 (minimum), if you go over your overdrawn that'll cost you £25 or more ... so actually now £70 sounds quite reasonable.
Instead of painting pay day loans as the enemy they should be being praised for providing a service that the banks aren't prepared to.

Banks are rigid, unhelpful and quite often patronising. They charge massively compared to payday loans ... check out £100 overdrawn /over limit compared to £100 with a payday loan ... it's CHEAPER to use a payday loan (source - Banks vs Wonga). The banks are nothing but bullies who abuse customers because they know we have no choice but to use them. you have to have an account to get salary paid in, to pay direct debits ... they restrict life and cost more than most payday loans.

It really makes me cross that nobody is challenging the banking structure before suggesting whipping the lifeline of payday loans away from people who are using them quite happily and responsibly. Yes Pay Day loans are expensive ... but they're not exploiting people. Loan Sharks and Banks are really the abusers - Pay Day loans offer a lifeline when everyone else would watch you drown. I know some people use them and get into trouble - but there are many thousands of people who use them for the purpose designed.

It's them who would be penalised if regulation is tightened too much - and I am one! you'd be as good as putting the noose around my neck ... I couldn't cope without that occasional help and support from the payday loan companies. I have nowhere else to go ... and if you make it too strict and force credit checks I would be in enormous trouble. I don't know how I would cope. Please help and don't let them strangle the life out of me.

Credit unions are touted as the alternative ... but you have to save with them to build credit ... and even then its normally to a max of £200. They are not a good comparable. Much better would be for banks to offer to clear pay day loans by taking on the debt, help people learn to budget, and a manageable way to reduce the spiral. But while they remain fixated on 6 year out of date credit history that bears no reflection to where you are today banks are nothing but a patronising hindrance for anyone with a poor credit rating. Sorry John but this one makes me SO cross ... people are slating Wonga ... why not the others too? And yet Wonga got me out of a huge mess, no hassle, no patronising, and the highest level of customer service. Banks vs Wonga ... I'd go Wonga everytime. Just had to share a different view xx

John Gray: Hi,  Yes, banks are pretty rubbish as well but they want to lend long term and do set stupid short term rates for customers who fall foul. But Pay Day loans can charge up to 4000% per year 4000% - credit unions do not have a £200 limit? but they do have some restrictions but please, please join one and while you may have to take a pay day loan out don't think anyone is having a go at you, blame the company and the society that forces working families to feel they have to do so in order to survive. Good to hear from you again. Take care. John

Hi John; Yep apr on pay day loans is mad ... but for a month is often cheaper than bank overdraft or charges. .. banks hide this info away and thats my issue with people attacking pay days. Makes me cross to hear politicians saying ahhh the apr is terrible ... but not looking at what else could be done. The reason pay days get away with it is because there is no practical solution or alternative. I looked into credit union and they genuinely couldn't help me as I couldn't afford to save with them first. They'll only lend a multiple of what you regularly save with them ....and only when you've made several payments. Or that's what it was when I investigated it before .... might have changed since.

I don't feel I'm being blamed for using pay days but I am terrified there will be a knee jerk ban on them. Haven't needed them for a while but they are my security blanket against problems ... to know that in 20 mins I can get no hassle no questions cash boost is reassuring. Sorry this has hit a nerve as you can tell ... I think paydays are greedy on their apr ... but I prefer their open style and approach. They don't judge me. I know what it will cost and its a grown up clear way of borrowing money. Rather than the banks who I find appalling to deal with now I have a bad credit rating ... they patronise, and make me feel like the lowest of the low. I Lol ah bet you've missed by little rants and outbursts really haven't you. Hope you're keeping well. xx

John Gray Hi: I have missed your rants! keep them up! I think we are both right over this. Pay day loans suit some folk but most people would be better off without them. Wonga makes over 50% of its profits from fines and roll over loans. If workers had a fairer share of the income cake and decent pay rises then they would not need such loans in the first place!

Hi John: Lol ok agree to disagree ... but try not to let them be taken away without a viable alternative being put in place. Eg if banks offered a guaranteed acceptance loan to convert off so people can get off the hamster wheel. Otherwise people will suffer ... and when they're struggling already turning off a source of coping ... even if its far from ideal ... would be catastrophic for some people and families. Keep in touch ... I do keep up with your blogs and posts xx