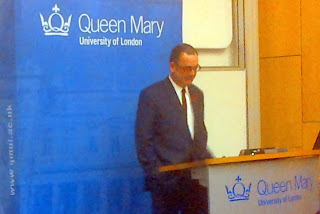 George Lansbury was a former leader of the Labour Party in the 1930's and at the time a very poplar politician in East London. But he is not that well known nowadays.

Jon believed that Lansbury by his example saved the Labour Party following the treachery and its near electoral annihilation in 1931. He was a supporter of the suffragette and trade union movements. A teetotal Christian socialist pacifist who despite their differences, laid the way for the great reforming Labour Prime Minister, Clement Attlee.

Lansbury was courteous to all but would bend down to none.  He was a patriotic, free born Englishman in the romantic tradition of William Morris. Not backward or anti-technology.

He was not a scientific socialist or transactional rationalist like Morrison, Dalton or Gaitskell. He believed in human virtue and the power of transformation. The need to motivate people and lead by personal example. Tell a story that speaks to hopes and dreams.

He hated the workhouse and refused to accept the concept of an undeserving poor. He wanted to gain power only to give it away ‘to chain down misery and set happiness free’.

The Labour Party went on to believe more in transactional politics than transformation. Jon argues that Labour's current "One Nation" politics is a return to such transformation beliefs.  This is Lansbury legacy to the Labour Party and in 2015 as in 1945 we will win power and recover from defeat.

There was a wide ranging Q&A chaired by local MP Jim Fitzpatrick. I was able to mention that I was the former Estate officer for George Lansbury House which is a Council Housing building in Bow which is built on the site of his former home.

My question was is (Labour Leader Ed Miliband's promise) to fix broken markets "transactional" or "transformational"? Jon grinned and said it is both.

You can check out the full transcript of his speech at New Stateman.
Posted by John Gray at Thursday, November 14, 2013